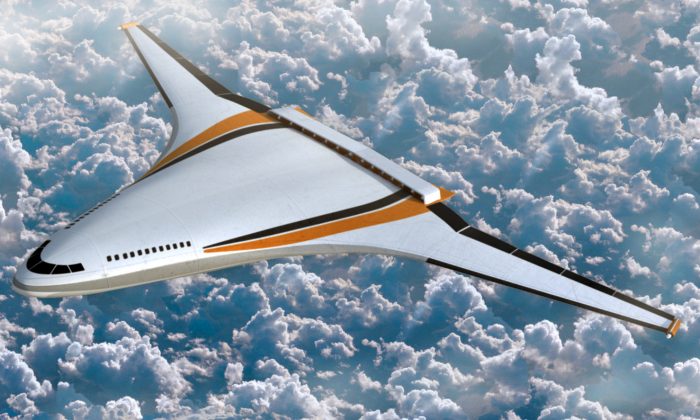 There’s a lot of technical re-invention in store for the airliner. (Boeing & NASA)
Tech

The crucial next step towards ensuring the aircraft industry becomes greener is the full electrification of commercial aircraft. That’s zero CO2 and NOx emissions, with energy sourced from power stations that are themselves sustainably fuelled. The main technological barrier that must be overcome is the energy density of batteries, a measure of how much power can be generated from a battery of a certain weight.

Tesla CEO Elon Musk has said that once batteries are capable of producing 400 Watt-hours per kilogram, with a ratio of power cell to overall mass of between 0.7-0.8, an electrical transcontinental aircraft becomes “compelling”.

Given that practical lithium-ion batteries were capable of achieving energy-densities of 113Wh/kg in 1994, 202Wh/kg in 2004, and are now capable of approximately 300Wh/kg, it’s reasonable to assume that they will hit 400Wh/kg in the coming decade.

Another aspect is the exponential fall in the cost of solar panels, which have already become the cheapest form of power in most US states. The expected 70% reduction in cost of lithium-ion batteries by 2025, and the rapid rise seen in the cost of kerosene-based jet fuel means that there will be a large and growing disparity in the costs of running aircraft that will greatly favour electrification. As is often the case, the reasons that will slow transition are not technological, but are rooted in the economic and political inertia against overturning the status-quo.

Biofuels While We Wait

Considering the average service-life of passenger and freight aircraft are around 21 and 33 years respectively, even if all new aircraft manufactured from tomorrow were fully electric, the transition away from fossil-fuelled aircraft would take two to three decades.

In the meantime, biofuel offers carbon emissions reductions of between 36-85%, with the variability depending on the type of land used to grow the fuel crops. As switching from one fuel to another is relatively straightforward, this is a low-hanging fruit worth pursuing before completely phasing out combustion engines.

Even though a biofuel-kerosene jet fuel blend was certified in 2009, the aircraft industry is in no hurry to implement change. There are minor technological hurdles and issues around scaling up biofuel production to industrial levels, but the main constraint is price – parity with fossil fuels is still ten years away.

The adoption of any new aircraft technology – from research, to design sketches, to testing and full integration – is typically a decade-long process. Given that the combustion engine will be phased out by mid-century, it would seem to make more economic and environmental sense to innovate in other areas: airframe design, materials research, electric propulsion design and air traffic control.

As we can see, we are living in a world of exponential change in technology. We need to step out of our linear day-to-day thinking to fully conceive and make use of what we have to shape the future.

In terms of the cost of computational power, computer technology is advancing more each hour today than it did in its entire first 90 years. With this in mind we can project that the equivalent of a US$1,000 computer today will by 2023 be more powerful than the potential brainpower of a human and, by 2045, will surpass the brainpower equivalent to all human brains combined.

The miniaturisation of digital electronics over the past half-century has followed a similar exponential trend, with the size of transistor gates reducing from approximately 1,000 nanometres in 1970 to 23 nanometres today. With the advent of transistors made of graphene showing great promise, this is expected to fall further to about 7 nanometres by 2025. By comparison, a human red blood cell is approximately 6,200-8,200 nanometres wide.

Putting together this increase in computational power and decrease in circuit size, and adding in the progress made with 3D-printing, at some point in the next decade we will be able to produce integrated computers powerful enough to control an aircraft at the equivalent of the cellular level in near real-time – wireless interlinking of nano-scale digital devices.

Using a biologically-inspired digital “nervous system” with receptors arranged over the aircraft sensing forces, temperatures, and airflow states could drastically improve the energy efficiency of aircraft, when coupled to software and hardware mechanisms to control or even change the shape of the aircraft in response.

Once electric aircraft are established, the next step will be to integrate a gimballed propulsion system, one that can provide thrust in any direction. This will remove the need for the elevators, rudders, and tailplane control surfaces that current designs require, but which add significant mass and drag.

The wings we are already designing are near their peak in terms of aerodynamic efficiency, but they still do no justice to what nature has achieved in birds. Aircraft design templates are a century old – constrained by the limitations of the day then, but technology has since moved on. We no longer need to build wings as rigid structures with discrete control surfaces, but can turn to the natural world for inspiration. As Richard Feynman said, “I think nature’s imagination is so much greater than man’s, she’s never going to let us relax.”

Industry’s Outlook of the Future

The aircraft industry has not been idle, of course. Here are some of their designs on the drawing board:

Ash Dove-Jay receives funding from the EPSRC and AC&E. He is affiliated with the Royal Aeronautical Society and American Institute of Aeronautics and Astronautics. This article was originally published on The Conversation. Read the original article.