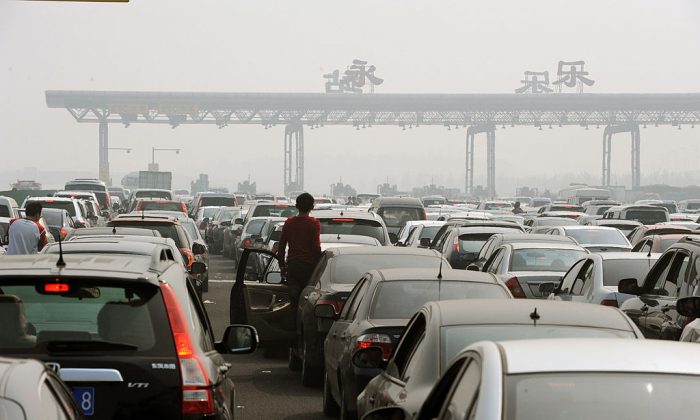 Chinese motorists get out of their cars to check on a massive traffic jam at a toll booth on the outskirts of Beijing on October 2, 2010. (STR/AFP/Getty Images)
China

Why is China’s huge toll road system running massive losses despite billions of income from toll fees? It’s another strategy devised by the communist regime to siphon wealth from the public, says Cai Shenkun, a well-known Chinese economist and blogger.

The Chinese state operates the largest toll road system in the world. Toll roads across the country collect more than 400 billion yuan (US$60 billion) each year. But strangely, this profitable monopoly industry reports huge losses year after year.

According to recently released data by China’s Ministry of Transportation, revenue from toll roads was 409.78 billion yuan in 2015 while operating expenses were 728.51 billion yuan, thus showing a loss of 318.73 billion yuan — twice as high as in 2014. Presently, China’s total toll road debt has accumulated to 4.45 trillion yuan ($660 billion).

The news caused a public outcry. People were incredulous that the toll roads could be making a loss while high toll fees were being charged to drivers. Some thought it was “a big joke.”

Facing public pressure, Sun Yonghong, the deputy director of the Ministry of Transportation’s Roads Bureau, explained in an interview with Caijing that 80 percent of toll roads income went to pay principal and interest on loan debts. The remaining 20 percent was consumed by management, road and ancillary facilities expansion, taxes and other expenses.

The deputy director’s explanation was nothing new. The excuse that the loan needed to be repaid and that there were huge maintenance fees has been used by central and local transportation management departments for a long time to quell public anger. Although China has more than 70 percent of the world’s toll roads, they suffer a loss every year.

Some media did a hypothetical loan repayment calculation based on a 5 year or longer loan with an interest rate of 6 percent. They figured that the 4.45 trillion yuan loan debt requires annual interest payments of 267 billion yuan and principal payments of 300 billion yuan. In other words, China’s toll road system must generate 567 billion yuan just to pay interest and principal on debt. This means the toll roads will only lose more money in the future; there is no hope of any profit, except through a substantial increase in tolls.

China’s toll road system is a profitable monopoly industry. So what is really behind these huge stated losses?

As early as Dec. 24, 2014, The Beijing News questioned the validity of losses claimed by the toll roads bureau year after year. Are the hundreds of millions of yuan in loans really used for new toll road construction? Are non-toll road loans, and even urban road loans, also included in the toll road repayments? How much of the loan payments is applied to the buildings and compounds belonging to highway management departments? What are the specific expenses that are included in operational and management expenditure? What exactly are the so-called “other expenses” of up to 10.4 billion yuan ($1.5 billion)? And finally, how much has been the annual collection of various tolls across the country over the years?

Highway Driving Is Costly in China

China has the highest percentage of toll roads in the world. According to China’s Ministry of Transportation, 95 percent of China’s highways are toll roads. In the just over 20 countries that have toll roads, the proportion of toll roads to regular roads is only about 1 percent.

Besides fuel taxes and toll, Chinese drivers pay many fines that cannot be tracked. Annual traffic fines amount to 100 billion yuan ($15 billion). In addition, a large amount of all kinds of fines are privately collected.

In the past, the United States also implemented a toll system. At that time, highways were built by private investment, but the policy was abolished by the U.S. government after two decades. The government then began to build large-scale road, rail and canal systems using taxpayer money, and these are mostly free, as public infrastructure invested by public funds should be used by the people.

Compared with developed countries, China’s logistics costs overall are much higher. Logistics costs account for 50 percent of commodity prices, 70 percent of agricultural and sideline products prices. The price of agricultural products, for example, is no longer decided by production season, but by fluctuations in transport costs. The burden of such fees is almost entirely passed on to the public, and mainly to the poor. The reason is simple: the poorer one is, the more one depends on public resources. When public resources become a public burden, the burden becomes heavier. Conversely, the more essential the goods are to the poor, the greater the proportion of transport costs becomes, and the greater the burden to the public.

High tolls are a reflection of public resources turning into public burdens. This is not just an economic problem and a livelihood issue, but is also related to a country’s political and ethical standards. Some government funded roads in China have been transformed into toll roads before the 15-year loan period expired, with the loan repayment period intentionally extended.

This strategy not only lacks social responsibility, but is also illegal. Because of lack of transparency in China, this problem is often not within the public’s range of supervision. Road users can do nothing but tolerate higher and higher toll fees.

This is an abridged translation of Cai Shenkun’s article posted on the author’s personal blog. Cai Shenkun is a well-known Chinese economist and blogger. He writes columns for a number of prominent business websites and was named a Top Ten Influential Blog Writer on Phoenix Television’s website for three consecutive years.