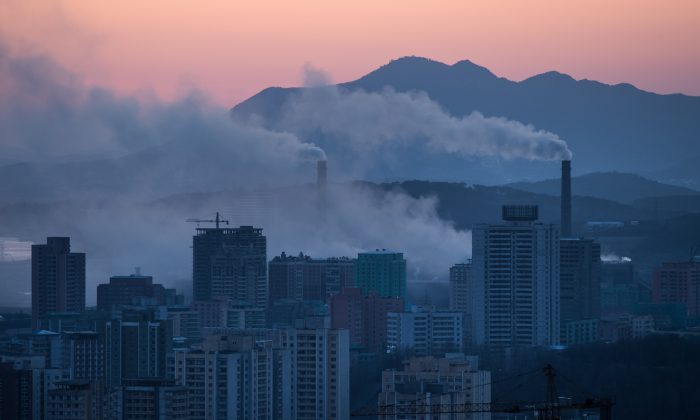 The chimneys of a power station amid the Pyongyang city skyline in North Korea on Feb. 17, 2017. (Ed Jones/AFP/Getty Images)
International

SEOUL, South Korea—North Korea may have found a new use for its large stockpile of chemical and biological weapons, which are meant for attacking South Korean and U.S. troops in the event of another war.

Malaysian police said Feb. 24 that a chemical weapon—the toxic VX nerve agent—was used to kill the estranged half brother of Pyongyang’s absolute leader at the Kuala Lumpur airport on Feb. 13. If North Korea’s involvement is confirmed, this would be an unusual and extremely high-profile use of its chemicals in an assassination.

Much like its secretive nuclear program, outsiders struggle to nail down exact details about the North’s chemical and biological weapons programs. Here’s what is known.

North Korea is not a signatory to the international Chemical Weapons Convention. The country has been producing chemical weapons since the 1980s and is now estimated to have as many as 5,000 tons, according to a biennial South Korean defense white paper. Its stockpile, one of the world’s largest, reportedly has 25 types of agents, including sarin, mustard, tabun, and hydrogen cyanide. It also is thought to have nerve agents, such as the VX allegedly used by two women—one Vietnamese and the other Indonesian—to kill the North Korean leader’s half brother, Kim Jong Nam.

North Korea also has 12 to 13 types of biological weapons, said Lee Illwoo, a Seoul-based commentator on military issues. It can likely produce anthrax, smallpox, and plague, the South Korean defense paper said. If war breaks out, North Korea would likely target Seoul’s defenses with chemical and biological weapons dropped from aircraft or delivered via missiles, artillery, and grenades, experts say.

A New Level of Sophistication

VX, which Malaysian police said was detected on Kim Jong Nam’s eyes and face, was used by Saddam Hussein’s forces in a 1988 poison gas attack on the Kurdish city of Halabja in northern Iraq that killed thousands. If North Korea really did use VX to assassinate Kim Jong Nam, it would show a new level of sophistication in its handling and use of chemical weapons, said Kim Dae Young, a military expert at South Korea’s Korea Defense and Security Forum.

“They probably conducted a lot of tests to come up with a perfect amount that would kill Kim Jong Nam, but not harm the assailants or anyone else nearby in a crowded airport,” Kim said.

It’s still unclear how the suspects allegedly handled the VX, but analysts say that North Korea is probably capable of producing VX as a binary agent, where two chemicals that are separately harmless become a chemical weapon when mixed together.

“The biggest weakness of chemical weapons is that their effectiveness expires soon and new supplies need to be made constantly, so North Korea maintaining a stockpile of up to 5,000 tons indicates a very strong production capability,” said Kim.

Some defectors from the North have claimed that the authoritarian country tested chemical agents on political prisoners. The North is also thought to have some 17 microbiological labs and other places to nurture and produce germs to be used as weapons. The North can argue that such places are meant to study how to prevent epidemic diseases. But analyst Lee said the North has already placed those germs in storage facilities in military units, which means Pyongyang intends to use them as weapons.

Seoul has blamed Pyongyang for using poison in past assassinations or failed assassination attempts. When South Korean officials squashed what they said was a North Korean attempt to kill North Korean defector-turned-anti-Pyongyang activist Park Sang-hak in 2011, they unveiled a pen-liked weapon carried by the would-be assailant that hid a needle dipped in neostigmine bromide, a chemical that attacks the nervous system. South Korea also suspects the North was involved in the killing of Choi Duk-kun, a South Korean diplomat stationed in the Russian city of Vladivostok, who was found dead in front of his apartment in October 1996. Investigators later found neostigmine bromide in Choi’s body.