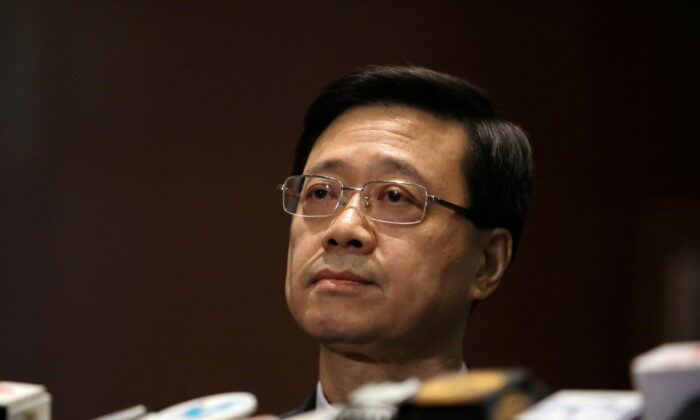 Secretary of Security John Lee Ka-Chiu announces the withdrawal of the extradition bill, in Hong Kong, on Oct. 23, 2019. (Ammar Awad/Reuters)
Thinking About China

What Can Hong Kong’s New Leader Bring to the Table?

This July has been an unusual month in Hong Kong. First, Xi Jinping, China’s leader, came to inaugurate Hong Kong’s new cabinet members. Chief Executive John Lee, a former policeman, was cherry-picked by Beijing to take up the top job.

It was shocking at first, but Hongkongers just got used to the city’s absurdity, while the so-called “one country, two systems” literally turned into a police state.

Then, on July 3, renowned novelist Ni Kuang (倪匡) passed away at the age of 87. At the annual Hong Kong book fair, author Chua Lam (蔡瀾) paid tribute to his longtime friend Ni Kuang; he shared with the audience how we should approach death: instead of feeling sorrow, how we should live is more important.

Then came the Hong Kong Film Awards, and Patrick Tse (謝賢) became the eldest actor ever to win the best actor award at 85.

Then came perhaps the most shocking incident to close the month of July: the falling of a gigantic screen that dropped onto the stage at the boy band group Mirror concert at the Hong Kong Coliseum, injuring two dancers.

Besides Xi’s official visit to Hong Kong, most of the news in Hong Kong is way too “trivial.”

What might take up the Hong Kong coming weekend coverage, perhaps, is the long queue at the Animation Comic Game Hong Kong show, which started Friday, July 29, and finishes on Tuesday, August 2.

Trivial news is the new trend, while no major news is good news in Hong Kong.

Hong Kong, which has now clearly turned into a police state, has joined the ranks of Xin Jiang and Tibet as places with the highest level of surveillance and suppression.

The dismantling of Hong Kong’s society is surreal, and the new Hong Kong leader is also a man with no mercy, best known as a “yes man,” to execute direct orders from Beijing.

After all, John Lee Ka Chiu, former police and subsequently became Security Chief and Chief Secretary of Hong Kong, was brought in, alongside former Chief Executive Carrie Lam, to push the now defunct Extradition Bill to Hong Kong. This defunct bill has caused many grievances and turmoil in our once famed international city.

John Lee, with the blessings from Beijing, has eased in quite well in his first month as the Hong Kong leader, with not much criticism from the Hong Kong general public. That said, nothing can be further from the truth. Those who have been opinionated or protested with resistance in Hong Kong have fled, been detained, imprisoned, or become very silent if they still live inside Hong Kong.

The days of the Hong Kong police’s violent crackdown on dissent might be over. Still, the government wants more: limiting freedom of expression, religion, peaceful assembly and association, and indoctrinating the young generation with patriotic education and the extreme makeover will not stop until the city is fully “transformed.”

As for the not-too-newly minted Chief Executive (CE) John Lee, I wish he could be different from his predecessor Carrie Lam, but my hopes are not high. This former police officer was put into so many posts within the Hong Kong public ranks at supersonic speed since 2019. Beijing’s decision is “absolute ascension” into the top job in Hong Kong to replace Carrie Lam was Beijing’s decision.

Being the CE of Hong Kong is a point of no return. He and his predecessor Carrie Lam have been reprimanded and sanctioned by the former U.S. Trump administration for undermining Hong Kong’s autonomy, alongside a few other current administration members.

So, the million-dollar question is: can John Lee heal the wounds of Hong Kong people and distinguish himself from the “most hated” CE of all time, his predecessor Carrie Lam?

For the coming months and years of Lee’s first term as CE, instead of running Hong Kong using the rule by fear tactics, he needs to listen to all Hong Kong people living inside and outside of Hong Kong. He needs to be humble, with the ability to listen to all voices, which seems quite difficult for someone with his background.

The massive exodus of Hongkongers due to political uncertainty and high-handed suppression has been more than surreal.

What kind of leader would John Lee look like if he is “holding Hongkongers at gunpoint,” which he knows well by being almost a lifetime policeman, while not tolerating any form of criticism? It would be a turning point if Hong Kong were allowed to have protests and candlelight vigils for the Tiananmen victims again, but I know this will not happen.

Yes, the government can use any lame excuse to frame its people for colluding with foreign forces without proof, but this would make Hong Kong tumble even faster.

If John Lee still uses the tactic of “rule by fear” to run Hong Kong, there is absolutely no way to restart the second half of “one country, two systems.”

Let us also take a step back. The Hong Kong policemen and some protesters have used violence against each other during the 2019 social movement.

But clearly, the use of excessive violence and abusive power from the government reminds the world that Hong Kong was close to like the Tiananmen crackdown incident in 2019. If the totalitarian regime takes more missteps moving forward, Hong Kong will turn into a place of absolute no return.

With all the wishful thinking we have these days for Hong Kong, I wish that John Lee has the wisdom to connect with the people. Just not too long ago, in John Lee’s one-man race into the post as CE of Hong Kong, his campaign slogan was “Starting a new chapter for Hong Kong together” (同為香港開新篇).

And my last advice to John Lee: listen to all voices, bring something tangible to the table, and to not turn himself into a greater joke for Hong Kong.