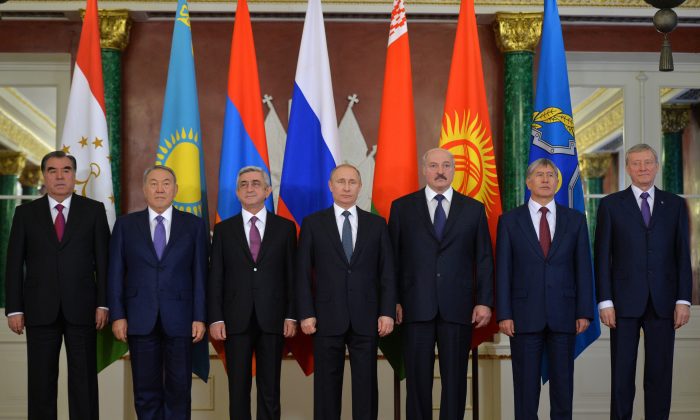 While international attention has focused on Russian military operations in Ukraine and Syria, Moscow has also been involved in a flurry of diplomatic and security initiatives to address the growing instability in northern Afghanistan.

But its moves to bolster regional security are more than just a response to local security concerns. Russia has a broader strategy that could leave it as the dominant security actor across much of Eurasia.

Even before the shock of the Taliban occupation of Kunduz in late September, Russian officials were concerned about the fragile security situation in northern Afghanistan, including the rise of Islamic State (ISIS) in northern Afghanistan and its potential spread to Central Asia and thence to Russia’s large Muslim community. As if to emphasize the domestic threat, on Oct. 12 Russian police announced that they had uncovered a terrorist plot in Moscow apparently involving a group of Central Asian extremists.

Russia has a broader strategy that could leave it as the dominant security actor across much of Eurasia.

Insecurity in Afghanistan may pose a potential security threat for Moscow, but it is being seized upon as a major geopolitical opportunity. Against a backdrop of failed Western policies across much of Russia’s southern flank; Moscow is moving quickly to fill a security vacuum in the region. It is strengthening existing alliances to consolidate its hold over former Soviet republics in Central Asia and reshaping the security dynamics of the region around its own favored security groupings—the Collective Security Treaty Organization (CSTO) and the Shanghai Cooperation Organization (SCO).

The first step has been a series of meeting with Central Asian leaders, all on the frontline in case of renewed Afghan insecurity. A meeting between Russian President Vladimir Putin and Tajikistan’s President Emomali Rakhmon led to promises of more attack helicopters to bolster the existing Russian military based in the country, which has become the hub of a well-developed defense system against cross-border infiltration.

Putin also took time out of his birthday celebrations in Sochi to meet Almazbek Atambayev, the president of Kyrgyzstan, a country that has become the linchpin of Russia’s security strategy in the region. Until 2014 Kyrgyzstan hosted a U.S. airbase, but as I explored in a recent paper, Russia has been remarkably successful in ousting the Americans and turning Kyrgyzstan into a dependable ally in the region.

Uzbekistan and Turkmenistan have appalling human rights records, limiting the potential for Western aid, and it may be hard to refuse Russian offers of help if unrest grows along their borders with Afghanistan.

If Tajikistan and Kyrgyzstan are relatively relaxed about an enhanced Russian military presence, the Uzbek President Islam Karimov is instinctively allergic to talk of renewed Russian influence and pulled out of the Russian-led CSTO in 2012.

Now the northern Afghan crisis offers an opportunity to bring Uzbekistan back into Moscow’s embrace. A delegation from the Russian Ministry of Defense, led by Deputy Minister Anatoly Antonov, has recently paid the country its first high-level visit since 2007.

There was no coverage of the Russian visit in Uzbekistan’s heavily censored press. Instead, the newpapers led on a summit with neighboring Turkmenistan’s President Gurmanguly Berdymukhamedov. The two presidents both have serious security concerns about Afghanistan, but both want to manage them without Russian assistance. Both states have appalling human rights records, limiting the potential for Western aid, and it may be hard to refuse Russian offers of help if unrest grows along their borders with Afghanistan.

Afghan officials have also been in Moscow, seeking assistance. vice president and Uzbek warlord Abdul Rashid Dostum has sought to revive old ties during a recent visit, also paying a side visit to the influential Chechen strongman Ramzan Kadyrov, to share experiences of “fighting terrorism.” If the Afghan situation worsens significantly, Dostum offers the potential for Moscow to build up a further band of loyal forces in the north of Afghanistan, in an effective re-run of its Taliban-era support for the Northern Alliance.

An anti-ISIS stance provides Russia with the opportunity to consolidate its presence in Central Asia and become the center of new alliances with China and Iran.

Other Afghan government officials attended a conference of SCO members and observers on Afghanistan in Moscow. The chief of Russia’s general staff, First Deputy Defense Minister Valery Gerasimov, took time out to give a speech that highlighted the failure of U.S. policy in the Middle East, leaving little doubt that Moscow now sees Afghanistan through the same geopolitical prism as it frames Syria. Russian intelligence officials regularly claim that ISIS is part of a broader U.S. plot to destabilize Central Asia and Russia from the south.

Still, there is no appetite for Russia to get involved in Afghanistan in the way it has in Syria. There are still bitter memories of the humiliating Soviet withdrawal from Afghanistan. But an anti-ISIS stance in the region provides Russia with the opportunity to consolidate its presence in Central Asia and become the center of new alliances in the region—with SCO partners such as China, and with Iran—and to sponsor anti-Taliban and anti-ISIS forces in northern Afghanistan.

More intriguingly, some Russian officials see Moscow’s new strategic initiatives in Syria and Afghanistan as a chance to carve out a significant role in a wider region. State Duma Speaker Sergei Naryshkin has been talking of a “Greater Eurasia,” linking Russia not only to former Soviet republics, but more widely to a range of allies in Syria, Iran, India, and China.

This may be just another of Russia’s historical spatial fantasies for now, but in a rapidly changing international environment, Moscow will try to use its dominance in Central Asia as a first step toward shaping a new regional security order.

David Lewis is a senior lecturer of politics at the University of Exeter, U.K. This article was previously published on TheConversation.com