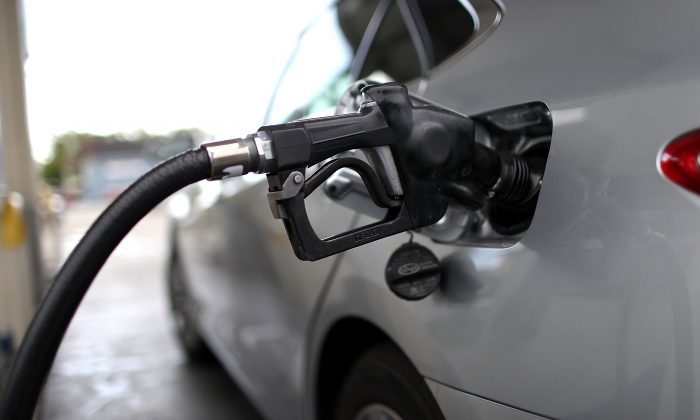 A gas pump fills a car with fuel at a gas station on May 10, 2017 in San Rafael, California. (Justin Sullivan/Getty Images)
Northern California

What Are Californians Paying With the New Gas Tax Increase?

With the new 5.6-cent increase on California gasoline taxes as of July 1, the Golden State now has both the highest gas taxes and highest gas costs.

The increase is connected with a 2017 bill, SB1, signed into law by former Gov. Jerry Brown. The bill, which was designed to raise roughly $5 billion a year for road maintenance and mass-transit programs, came into effect November of that year, increasing gas taxes by 12 cents at the time. The law also allows the state to continually raise gasoline taxes, based on inflation, without further legislative or voter approval.

Prior to the July 1 increase, Pennsylvania was the only state with a higher gasoline tax rate, while Hawaii often had the highest gas prices overall.

Proposition 6, a Republican-led initiative in last year’s midterm elections, which would have repealed SB1 and mandated that all future gasoline tax increases would have to be approved by a popular vote, failed to pass last fall, keeping the gas tax in place.

Gasoline prices surged at the beginning of the year, but began to drop in May and June, before rising again in July due to the new tax, according to GasBuddy.

Gov. Gavin Newsom has placed blame for gas prices on possible “inappropriate industry practices,” as opposed to California’s taxes, he wrote in a letter to the California Energy Commission. In April, he ordered the commission to investigate the state’s high gas prices.

The commission in May said that market manipulation could potentially explain high gasoline prices in the state, but that it would continue to investigate the issue.

“With this increase, California will once again have the highest gas taxes in the nation. You’d hope that would at least pay for quality roads, but no, ours are some of the worst in the country,” Assembly minority leader Marie Waldron (R-Escondido) said in a statement. “It’s sad that instead of using existing funding efficiently, Democrats, on a party-line vote, supported yet another regressive tax increase on California drivers.”

Waldron’s counterpart in the State Senate, Shannon Grove, said in a statement that the increase will “make California less affordable and take another $850 million out of our families’ pocketbooks,” reported AP.

Republicans in the legislature attempted to delay the July increase, but their measure was blocked by Democrats, who hold a 61–19 majority in the Assembly and a 29–11 majority in the Senate.

According to the state Tax and Fee Administration, the gasoline tax now stands at 47.3 cents a gallon. This will continue to increase every year indefinitely starting July 1, 2020, to keep up with the California Consumer Price Index.