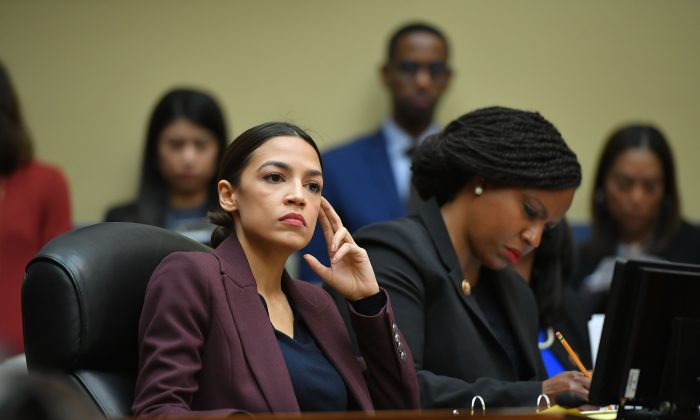 AOC’s Similarities to LBJ Should Be Warning for CPAC

WASHINGTON—As thousands of political leaders and activists from across the country convene Feb. 28 just outside the nation’s capital for the 46th Annual Conservative Political Action Conference (CPAC), odds are a former bartender-turned-socialist lightning rod will be a constant topic of conversation.

Rep. Alexandria Ocasio-Cortez is the 29-year-old New Yorker who exploded onto the national political scene June 26, 2018, by defeating 10-term incumbent Rep. Joe Crowley in the Democratic primary. Crowley was chairman of the House Democratic Caucus at the time of his shocking defeat.

Ocasio-Cortez was easily elected in November 2018 to New York’s heavily Democratic 14th congressional district seat, which includes portions of the Bronx and Queens.

Since taking the oath of office in January, she has arguably had more impact on the course of the Democratic Party than any other leader, including House Speaker Nancy Pelosi.

After all, it was Ocasio-Cortez’s Green New Deal, not Pelosi’s, that, within days of being made public, won endorsements from virtually every major Democrat, including those running for the party’s 2020 presidential nomination.

Ocasio-Cortez does make rookie mistakes, like declaring herself “the boss” on environmental issues because nobody else has put forth a climate change proposal that, like hers, costs an estimated $93 trillion, requires the elimination of air travel and cow farts, and necessitates retrofitting every building in the country—all within a decade—or “we’re screwed.”

She’s also joined a raucous crowd of demonstrators in Pelosi’s office, and there are media reports of ethically questionable payments made to her boyfriend, prompting the Washington Examiner’s Beckett Adams to remark:

“You’d think it would take her at least a couple of months to get into the swing of things, learning the ropes of playing cute financial games with donor cash, but you’d be wrong.”

Still, as Marian Currinder pointed out recently in Vox, Ocasio-Cortez is not simply a flash-in-the-pan dim bulb who somehow got lucky in defeating a politically tone-deaf, apathetic old white guy.

To the contrary, she has something in common with a young, unconventional Democratic House member who, decades ago, challenged party leaders, became the most powerful member of Congress, and ultimately made it into the Oval Office.

Currinder explained the bold move that launched Rep. Lyndon B. Johnson (LBJ) on that path after spending his first two years in Congress in obscurity:

“But then something changed. In October 1940, when Johnson was 32 and just three years into his House career, he began receiving letters from more senior colleagues who wanted a few minutes of his time …

“So what happened in October 1940? Johnson made a career-changing discovery: He could use his connections with Texas oilmen to raise a lot of money for his Democratic colleagues.

“Construction magnates Herman and George Brown had been major financiers of Johnson’s political career. Johnson ‘repaid’ their generosity with federal contracts, and they, in turn, brought many of their big oil friends into the fold.

“These men wanted assurances that Congress wouldn’t do away with the oil depletion allowance or the various tax breaks from which they benefited. Johnson was happy to oblige, and for his efforts, they all wrote checks for $5,000 to the Democratic Congressional Campaign Committee (DCCC)…

“After the money was disbursed, Johnson followed up with telegrams to each candidate making sure they knew that he was responsible for the contributions.”

Johnson thus gained power and influence independent of one of the most powerful House Speakers ever, the legendary Sam Rayburn.

And what is Ocasio-Cortez doing that is reminiscent of LBJ, other than being the same age, 29, as Johnson was at the beginning of his congressional career?

“Like Johnson … she’s experimenting with different approaches to fundraising. While Johnson’s approach relied on big-money donors, Ocasio-Cortez is asking her supporters for a small monthly donation, which she compares to a Netflix subscription,” Currinder explained.

In the internet age, not only does her approach free her from the Democratic leadership’s incessant demands on rank-and-file members to do fund-raising for the DCCC, which many members call a “time-suck,” the subscriptions potentially offer her an independent power base, just as those oilmen did for LBJ.

Chakrabarti told Politico Playbook earlier this year that Ocasio-Cortez will “basically show the American people what will be possible if the Democrats win the House, the Senate and the presidency in 2020, and that means putting our best foot forward.”

Thus, the Green New Deal makes sense because “[when] you shoot for big stuff, you stay true to the movement, you fight unapologetically on the inside, that is a very, very powerful way to pass the radical solutions that are necessary to face the radical problems that you have,” he said.

Still, Democrats are not unanimously swooning over Ocasio-Cortez, with some cautioning that it’s too early to declare her an unbridled success.

“I don’t know what to make of her yet, after all, she’s only been in Congress for about a month or so,” Democratic strategist Jim Manley told The Epoch Times.

“She’s got all the tools required to become an effective legislator, but whether she can pull it off remains to be seen,” Manley said. “What I find interesting is Republicans are spending an awful lot of time trying to demonize her, poke holes in her proposals.”

But Manley cautions that “she symbolizes what is happening more and more on Capitol Hill where each and every one of these folks are becoming independent power bases, not beholden to the leadership, in part because of their independent fund-raising base.”

It would also be a mistake, Manley said, to overestimate Ocasio-Cortez’s position within the Democratic hierarchy.

“It’s ridiculous for Republicans to suggest to the extent they have that she’s a major player in the Democratic Party right now,” Manley said.

“Despite the attempts of some Republicans to suggest she’s moving the country in a direction of socialism, the reality is that many of the proposals she’s making are core beliefs of the Democratic Party,” he said.

“I don’t see any way to stop it until a car wreck of immense proportions, the sort of thing that happened after the McGovern left took over the national Democratic Party at the 1972 convention, rewrote the rules, and then suffered the massive loss to Nixon,” Campaigne said.

He was referring to Sen. George McGovern (D-S.D.), whose insurgency ousted an aging Democratic establishment and replaced it with younger activists, many of them veterans of the 1960s New Left eruptions on campus.

McGovern won the nomination but then lost every state but his own and the District of Columbia, as Nixon carried 49 states in one of the biggest landslides in American political history.

“It wasn’t until Bill Clinton and Dick Morris came along before the Democratic Party appeared to again make sense to a typical cradle Democrat. Deja vu time?” Campaigne asked.