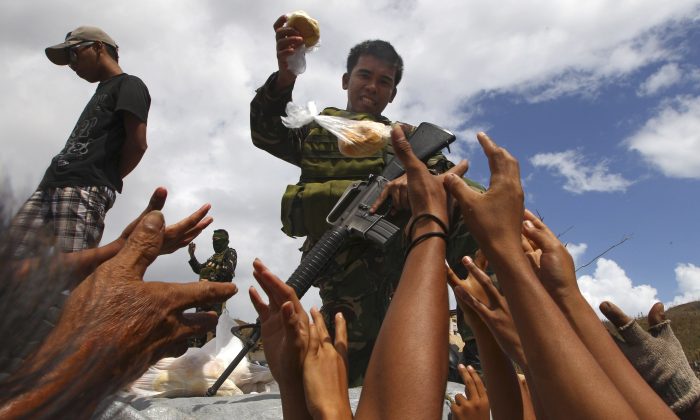 A Filipino soldier hands out bread to the survivors of Typhoon Haiyan in Maraboth, Philippines, Nov. 14, 2013. (Dita Alangkara/AP)
Opinion

What a Lack of Generosity Toward Philippines Tells Us About China

Typhoon Haiyan slammed the Philippines with a humanitarian disaster of such a high order that authorities cannot even determine how many have died yet. Nations have responded with aid, some with more and some with less.

Disasters remind us of our common humanity, stripping away the notions and the grudges we may have toward another nationality or ethnic group. They prompt us to extend a helping hand. We set aside our disagreements, open up our hearts, and come forth with as much generosity as we can.

What are neighbors for? And when the disaster is so large in a world shrunk by jet travel and the Internet, are we not all neighbors?

The United States will provide $20 million, and has implemented a military operation with troops and an aircraft carrier.

However, the Philippines’ biggest neighbor, China—a two-hour flight away—has pledged only about $1.6 million in cash and materials. This amount was revised upward, from its initial miserly pledge of $200,000, only on Thursday, following widespread criticism.

Here is what some nations whose economies are a fraction of China’s, and who are not in the neighborhood, have pledged: Ireland, $1.4 million; Italy, $1.3 million; and Spain, $1.8 million.

It’s possible that the neighborly dispute over the Spratly Islands could be restraining the Chinese regime’s willingness to help the Philippines. The Spratlys are claimed by both nations, but sit much farther away from mainland China than the Philippines, and are mostly within the Philippines’ 200-mile exclusive economic zone defined under the United Nations Convention on the Law of the Sea. They are rich in oil and gas, as well as rich for fishing.

China has sent military ships to the farthest reaches of the South China Sea to harass Philippine fishing boats in the disputed waters, but hasn’t summoned the will to send the same ships to provide relief after the typhoon.

Whether it’s due to peevishness over a territorial dispute, or some other reason, withholding humanitarian aid to a neighbor demonstrates a lack of clear thinking and a lack of generosity on the part of China’s national leadership.

The second-largest economy in the world ought to be able to come forth with ample assistance. China has the obligation, from the standpoint of basic humanitarian impulse, to help a neighbor in need.

But even on a more practical and coldly calculating level, China should give generously, purely out of self-interest—if only to further its strategic PR objectives, as it seeks to continually exert influence and garner prestige on the world stage.

This line of thinking, however, requires the ability to see ourselves as others see us. The current leaders of China view the world through their own lenses. These lenses have become colored and bent by the warped system within which they live and breathe. They cannot see themselves as the rest of the world sees them.

The Party, Not the People

One thing should be clear: this highly visible failure of generosity should not be placed on the Chinese people, or the Chinese nation. Over the millennia, the Chinese people have endured suffering from myriad causes, both natural and man-made. From their well-developed capacity to endure suffering springs the awareness that leads to great generosity. The people of China know suffering, and gladly extend a hand to help a neighbor when they can.

No, this is not a problem with China itself—it is a problem with the regime currently ruling China, the Chinese Communist Party. The CCP, interested first and foremost in its own survival and enrichment, has no innate generosity toward the people of China, much less toward neighbors. It will give buses to schools in Africa if it furthers its own selfish strategic interests, while letting Chinese children walk miles to school.

It will build “tofu buildings” for its own schoolchildren while constructing veritable mansions for Party officials with the people’s money. Numerous “tofu building” schools collapsed in the May 2008 Sichuan earthquake, killing hundreds of children. In at least one graphic case, while a solid and expensive Party building withstood the tremors, the tofu schoolhouse next door collapsed, with predictable results for those inside.

The CCP, by broadcasting its stinginess to the world in the wake of its neighbor’s tragedy, further reveals the values at its core. The CCP dearly wishes to take center stage in world affairs, but shows that it wouldn’t know how to act once it arrived there.