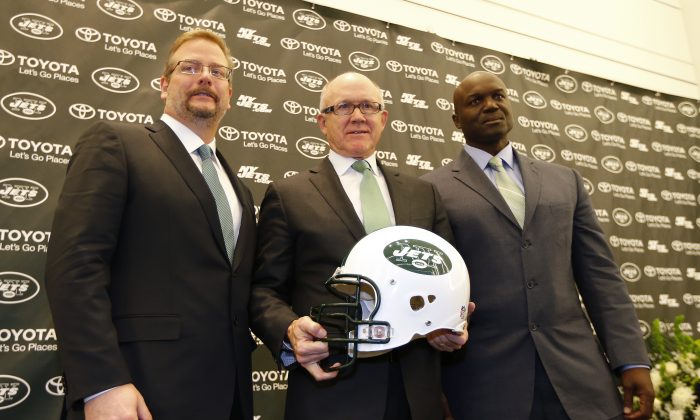 What a Difference a Year Makes: How the Jets Have Been Transformed

A year ago at this time, Rex Ryan’s Jets found themselves at 1–6. Despite a number of uneven performances in a row, Geno Smith was still the starting quarterback. The secondary consisted of a talented rookie at safety and a number of throw-ins at cornerback—where injuries and free agent miscues by now-former GM John Idzik had created a void of talent.

Fast-forward a year and the suddenly steady Jets are 4–1 heading into a showdown with the 5–0 Patriots.

What’s changed in the past year that’s improved the team? A number of things.

Smith has talent—no doubt about it. He was just inconsistent and could learn a lot from a veteran quarterback.

Fitzpatrick is a journeyman quarterback and though he’s never made a Pro Bowl, he seems to be the even-keeled personality in the huddle that the Jets needed. Three times in five games this year, the Jets have been behind in the second quarter and already twice Fitzpatrick has helped right the ship and led them to a win. His 83.4 quarterback rating—albeit only five games into the season—is better than what Smith or Mark Sanchez ever did in in New York.

Marshall was a low-risk pickup for the Jets, acquiring him (and a seventh-round pick) from Chicago for a fifth-rounder last March. He lost some weight this summer and looks great—currently he’s 11th in the league with 511 receiving yards. Adding him to a unit that already included Eric Decker has given Gang Green a much-needed balanced offense. It’s also opened holes for running back Chris Ivory, who’s currently third in the NFL with 460 rushing yards.

3. Rex Ryan Out, Todd Bowles In

Every Jets fan loved Rex Ryan. He was boisterous, he didn’t pull any punches, he knew how to coach defense with the best of them, and when his team got to the playoffs they weren’t timid in the least. But after six seasons in New York a couple of glaring weaknesses had popped up: a way-too-long leash with his quarterbacks and a general lack of player discipline.

Was it Ryan’s fault that the Jets drafted Sanchez and Smith? No. But he seemed to believe that giving them the security of a starting job would eventually produce better results. It didn’t work. Meanwhile, his well-publicized letting-off-the-hook of Smith last year despite being tardy for a meeting is the ultimate anti-Bill Belichick move—and the four-time Super Bowl champion Belichick gets results with his moves.

Meanwhile Bowles seems to have a calming effect—much like his new quarterback. He was smart to give the starting job to Fitzpatrick—even after Smith’s jaw heals—after the veteran showed what he could do early on in the season. In addition, he knows how to coach defense and new Jets GM Mike Maccagnan has given him plenty of ammo in that area. Speaking of Maccagnan …

First, his low-risk trades for Marshall and Fitzpatrick (who was brought on for a conditional sixth-rounder) have greatly improved the offense.

On defense, he fixed the secondary with cornerback free agents Darrelle Revis, Antonio Cromartie, and Buster Skrine, who all signed multiyear deals with New York. Yet none of the deals have gigantic escalating salaries or signing bonuses that will hurt them down the road.

Then in the draft, Maccagnan resisted the urge to go with need over talent and selected USC defensive lineman Leonard Williams—despite the fact that the Jets had plenty of holes elsewhere. Williams has looked like the real deal in his five games so far and Maccagnan looks a genius for selecting him.

It’s all part of a makeover that has the Jets where they want to be—in line for the postseason.