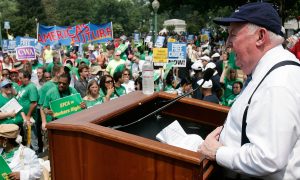 How Marxists Took Over the American Labor Movement
0 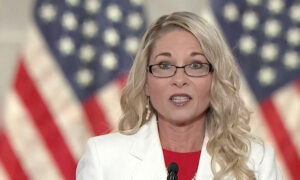 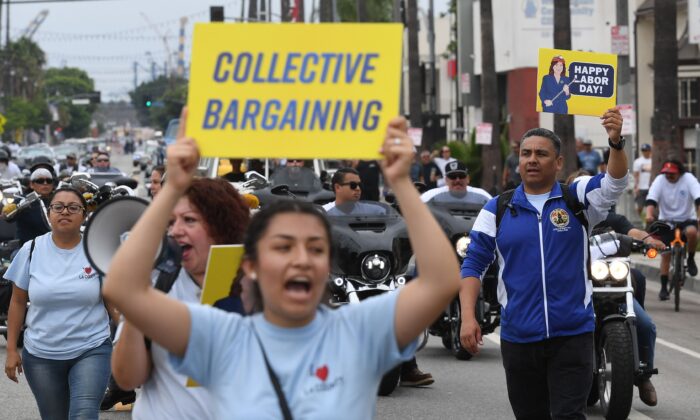 Union members and their families march through the streets during the annual Labor Day parade and rally in Long Beach, Calif., on Sept. 3, 2018. (Mark Ralston/AFP via Getty Images)
Viewpoints 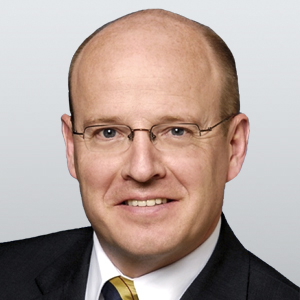 Union officials’ own filings show they spend over $2 billion on politics each election cycle, and that’s just what they admit. Further, the largest portion—well over a billion—of that total is from union general treasury accounts, which are funded by the dues and fees of workers who would be fired if they refused to pay.

According to the Center for Responsive Politics, already in the 2020 election cycle, 7 out of the top 15 highest-spending organizations are unions. Even though over 40 percent of union household members vote Republican, each one of these unions gave between 94 percent and 100 percent of its political contributions to Democrat causes and candidates.

With Big Labor poised to spend another $2 billion again this election cycle, one might start to wonder what union bosses are getting for all that money.

Look no further than Joe Biden’s own campaign promises.

Biden touts his support for the so-called Protecting the Right to Organize Act (or PRO Act) as the centerpiece of his labor agenda. Of course, even the title of the bill is misleading: The First Amendment’s freedom of association protects the right of any worker to join a union if he or she chooses. Further, Big Labor already enjoys countless special government-granted organizing powers, including the power to force workers to accept their “representation” and the power to force employers to fire any worker who refuses to pay for it in states without Right to Work protections.

Yet Big Labor isn’t satisfied with the current privileges granted by federal law. That’s why the PRO Act contains, as its flagship provision, the elimination of all 27 state Right to Work laws, which make union membership and financial support strictly voluntary.

It’s not difficult to see why the union bosses want to gut Right to Work protections for independent-minded workers. Without Right to Work, employees are forced to hand over a chunk of every paycheck to union officials just to keep their jobs. That money, once confiscated from workers, fuels the rest of the Big Labor agenda—including its massive political machine.

Considering that Joe Biden is one of the biggest beneficiaries from that war chest, he stands to benefit greatly if he can get forced dues flowing once again nationwide into Big Labor’s pockets—and into his campaign.

What’s more, union bosses are not content to force every worker currently in a unionized business to pay dues. As we’ve seen this year, the latest push from union-label politicians has been to expand the dues-paying ranks by forcing independent contractors, such as ridesharing drivers, to accept union boss representation by government mandate.

California’s controversial Assembly Bill 5 is on the verge of forcing companies such as Uber and Lyft to shut down in the state, threatening the jobs and livelihoods of hundreds of thousands of rideshare drivers, all in a bid to increase the number of dues-paying workers under Big Labor’s thumb.

The other anti-worker policies contained in the PRO Act have been well-documented. From allowing the National Labor Relations Board to unilaterally overturn secret ballot votes in order to impose unionization, to drastically expanding striking powers, the PRO Act amounts to a veritable wish list of union boss demands.

Biden’s extreme pro-union boss positions hardly stop there, though. He also supports the Card Check Forced Unionism bill, which was blocked by bipartisan opposition when unions pushed it in 2010, at a time when Democrats controlled both houses of Congress and the White House.

That proposal is best known for effectively ending the secret ballot election for unionization by allowing organizers to pressure and cajole workers into signing cards that are later counted as “votes” for the union. The bill’s lesser known but equally outrageous scheme empowers government bureaucrats to impose forced-dues union contracts over the objections of both rank-and-file workers and employers.

And that’s to say nothing of the public sector, where Biden backs legislation forcing every state and local government in America to set up systems of union monopoly bargaining for public employees under penalty of outright federal takeover.

Joe Biden, backed by Big Labor’s political spending, has endorsed every single one of these priorities. In fact, now he’s even out publicly declaring his intent to gut the Senate filibuster in order to get his agenda enacted, and Congressional Democrats, who themselves have taken tens of millions in direct contributions from Big Labor, are marching in lockstep to make this wish list a reality. For the union bosses, that’s more than worth the $2 billion price tag.

Mark Mix is president of the National Right to Work Committee.