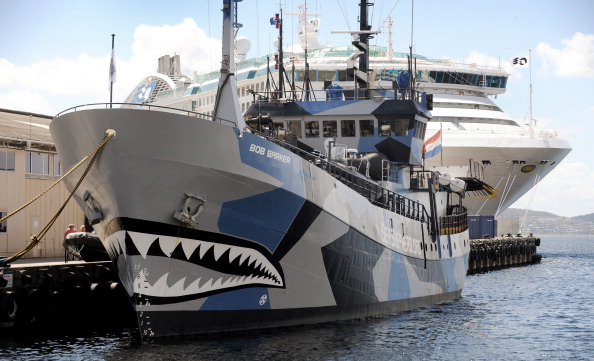 Environmentalist group Sea Shepherd ship 'Bob Barker' is moored in Hobart as it prepares to leave to confront the Japanese whaling fleet in the Southern Ocean on December 13, 2011. (William West/AFP/Getty Images)
US

Japanese whalers threw “iron grappling hooks at Sea Shepherd boats” and two of the crew were hit, Sea Shepherd said in a statement. “One crew member was struck twice in the face with a long bamboo pole,” it added.

According to Sea Shepherd, the whaler, Yushin Maru No. 2, continues to follow activist boat the Steve Irwin in the Southern Ocean 300 miles north of Antarctica.

Brian Race, 25, received cuts to his face from the bamboo pole, while 35-year-old South African Russell Bergh and 27-year-old Frenchman Guillaume Collet suffered bruises from being hit by the grappling hook.

Japan’s Institute of Cetacean Research (ICR) that runs the whaling ship, in a statement on Wednesday said it was attacked by the activist group, saying that Sea Shepherd members on two rubber boats attempted to disable the whaling ship’s propeller and rudder.

“Their behavior points to an attempt to illegally board the [Maru 2],” said the statement.

The ICR ship reported that it used its water pump and bamboo poles to push activists’ boats back away from the ship.

Every year there is a battle of wills on the high seas as the Japanese whaling fleet sails to the Southern Ocean to catch around 1,000 whales for scientific research. The Sea Shepherd sends its fleet out to try to prevent the catch, which activists say is a veiled attempt to circumvent the international ban on commercial whaling.