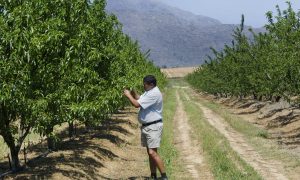 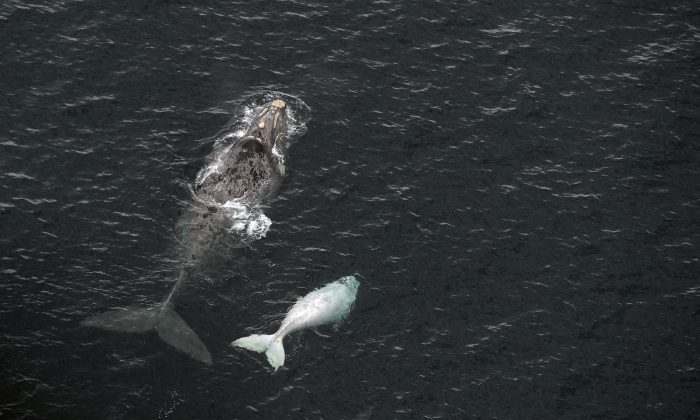 A whale in South Africa tried to swallow a tour operator during a feeding frenzy, and he lived to tell about it.

Rainer Schimpf, 51, went out in the water to film a sardine run last month, reported the New York Post.

“I was trying to get a shot of a shark going through the bait ball, and then the next moment it got dark and I felt some pressure,” Schimpf told the Post. “[That’s] when I instantly knew, a whale had grabbed me.”

“I could feel the pressure on my hip—there is no time for fear in a situation like that—you have to use your instinct,” he said.

Members of his crew filmed the ordeal, filming Schimpf’s entire torso caught in the animal’s jaws.

Read More
Tourists See Humpback Whale Sneak Right Next to Their Boat, Its Next Act Is Chilling
Dead Right Whale Found in Gulf of St. Lawrence

“As Rainer moved toward the bait ball, suddenly the water churned widely up, and I knew for sure that something was about to happen, so I held the focus of my camera on him firmly,” photographer Heinz Toperczer said.

A snorkelers in the jaws of a whale makes for a remarkable picture, and a reminder why keeping your distance from marine life is as much for your safety as theirs.

“Suddenly, dolphins shot out of the water, a white spray came out and then a whale appeared and grabbed him!” Toperczer continued.

The type of whale involved was a Bryde’s whale, which is a baleen-feeder that eats mostly plankton.

The whale realized what happened and let go.

“Whales are no man-eaters,” he said. “So this was really an accident. They are gentle giants.”

Schimpf asked the photographer if he “got it” on camera, adding, “I knew this was a very special moment.”

“I don’t think I had a ‘whale’ of a time, but I have the inside knowledge of what a whale is like,” Schmipf added. “It was an interesting experience, but certainly nothing I want to do again.”

Some said that his experience is akin to the Biblical tale of Jonah, the 8th-century prophet who was swallowed by a whale or a giant fish.

Bryde’s whales, meanwhile, can reach lengths of up to 55 feet and weigh up to 30 tons.

“As with the other large baleen whales, Bryde’s whales eat comparatively microscopic prey, mostly consisting of plankton, krill, and copepods (tiny crustaceans). They also feast on bigger crustaceans such as crabs and shrimps, as well as a variety of small schooling fish,” Whales.org says.

According to the website: “Bryde’s whales are found in every ocean of the world. However, as they prefer waters of 16°c or more, they limit their travel to within tropical, subtropical and warm temperate waters – the only species of baleen whale to do so. Some populations of Bryde’s whales take such a liking to an area that they are considered ‘resident’, while other populations migrate away from the equator in summer and back again in winter.”

An international team of researchers said they found a couple of dozen of these distinctly different orcas roaming the oceans off southern Chile in January. Scientists are waiting for DNA tests from a tissue sample but think it may be a distinct species, according to The Associated Press.

The National Oceanic and Atmospheric Administration felt confident enough to trumpet the discovery of the long-rumored killer whale on March 7. Some outside experts were more cautious, acknowledging the whales are different, but saying they’d wait for the test results to answer the species question.

“This is the most different looking killer whale I’ve ever seen,” said Robert Pitman, an NOAA marine ecologist in San Diego. He was part of the team that spotted the orcas off Cape Horn at the tip of South America.