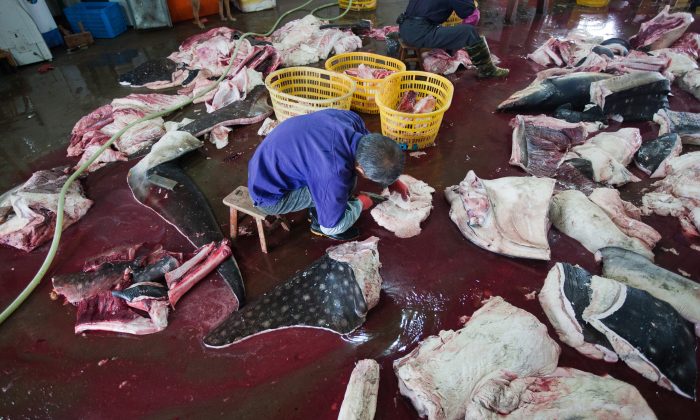 If We Want to Save the Environment, Images Like These Must Go Viral

The marine animals of the deep have always captured the imagination of human beings. their majestic size and stoic silence has made them the lords of their domain.

Then man came along,  armed with the greed and persistence of Captain Ahab. As trade became global, the hunting grounds grew.

The over harvesting of the oceans is not news, but these photos, released recently by Hong Kong-based wildlife conservation NGO WildLifeRisk have made it very vivid. A four-year investigation by WildLifeRisk has revealed that at least one factory in China’s Zhejiang Province is killing over 600 whale sharks annually, in what appears to be the world’s largest wholesale slaughter of an internationally- protected endangered species.

The whale shark is the largest shark, growing to a size of about 46 feet, about twice the size of the great white.

This is the “before” photo.

Investigators believe that the PuQi factory is only one of many engaged in the trade of endangered sharks and their products throughout coastal China.

Whale shark fins are dried in PuQi and sent to Guangzhou, situated in China’s southern Guangdong Province, where they are sold to restaurant owners who commonly use them in the trade as ornaments. The large fins are usually tied with red ribbons and placed on display in entrances, the investigation found.

Shark skins are sold as leather into the bag trade, while whale shark lips, stomach and flesh are sold into the restaurant trade.

The real money-maker, is the shark’s liver. Shark oil is a valuable product that is concentrated in high quantities in the liver. Oil from the liver is extracted for skin care products and lipstick, as well as for Omega-3 health supplements.