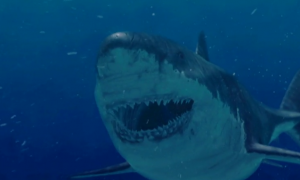 The age old man-animal conflict continues to raise its ugly head from time to time and sadly one or the other seems to pay the price very heavily. This time it is the Whale Shark pups who have been the unfortunate victims of this conflict. Whale shark pups caught as a by catch while fishing in the Kerala waters are not released back to the ocean, but are auctioned off by the fishermen for a price. Damage to the fishing net is being used as a valid excuse for this action even though the entanglement of pups in the nets does not cause that much damage.

The IUCN red-listed Whale Shark (Rhincodon typus) is one of the largest fish in the world. Found in coastal areas as well as open seas, they prefer warm waters and are found in the temperate and tropical oceans. Whale sharks are mostly solitary but feed in groups of around 100 individuals. They are ovoviviparous which means that the young hatch from the eggs inside the mother’s body and the mother gives birth to live young ones. A gentle species, the whale shark filter feeds by suction on plankton and smaller fishes.

The whale shark is highly migratory and it is during their pre-monsoon migration through the waters of Kerala between April and June that they are mostly caught in the nets. In India the Whale shark is given the same protection as Tigers that is; it is covered under the Schedule-1 of the Wildlife Protection Act, 1972. On the IUCN list, the whale shark is listed as a vulnerable species.

Despite this, the reports of the seafood agents show that almost every day a whale shark pup is being auctioned off at the Neendakara fishing harbour in Kollam since April. Recently four whale shark pups were on sale on the same day. The price depending on the size of the pup ranges between INR 3000 to 5000.

There is no domestic demand for the whale shark’s meat and it does not feature in the export accounts of the Marine Products Export Development Authority. Whale sharks are not even hunted actively in India. But when the adult fish accidentally do get caught in the net, the net gets destroyed sometimes and hence on the pretext of making the loss good they are sold.

The various body parts like the skin, cartilage, liver oil and meat have immense commercial value in the export market and are secretly smuggled to China, Taiwan and the Philippines via Sri Lanka. According to environment activists, the pups when caught do not damage the net. However, this does not stop the fishermen from cashing in on the opportunity to make a few extra bucks and so the captured pups are never returned back to the sea.

The only way to protect this vulnerable species seems to be the implementation of a system where the government compensate the fishermen for the destruction of their net due to whale sharks as well as the price earned by the sale of the whale sharks.

Currently only the Gujarat Government has taken this positive initiative. The fishermen in Gujarat are paid a sum of INR 25000 if they release the whale shark caught in their nets.  This campaign for whale sharks has been highly successful and there have been encouraging reports of the fishermen not only saving the whale sharks but also helping research on this species through circumstantial evidence.

This article was originally written and published by Shilpi Gemawat, a contributing writer for indiasendangered.com. For the original story and more information, please click HERE.