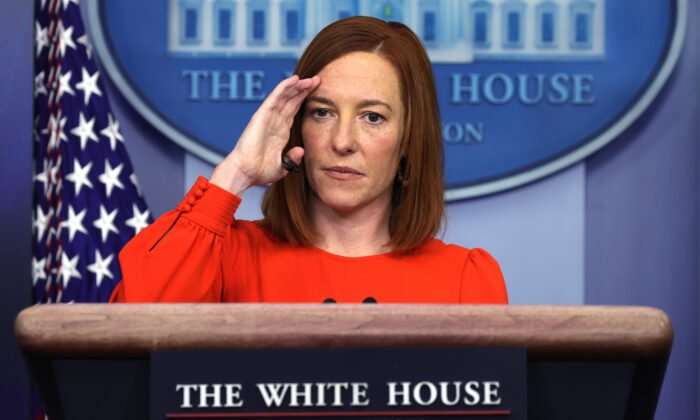 White House press secretary Jen Psaki on Wednesday reaffirmed that stimulus checks to Americans will be $1,400 and said the administration is looking into limiting income eligibility.

There was speculation that the stimulus payments would be less than the $1,400 amount that was proposed weeks ago. President Joe Biden included the checks in the $1.9 trillion stimulus package that he wanted to be passed but last week suggested that he is willing to negotiate on the amount for stimulus payments.

“Further targeting means not the size of the check, it means the income level of people who receive the check. That’s something that is under discussion,” Psaki said.

“The president also had the opportunity to meet in the Oval Office just a few minutes ago to meet with [Senate Majority] Leader Schumer and the Democratic chairs of the Senate committee with jurisdiction over the American rescue plan,” said White House Press Secretary Jen Psaki on Wednesday. “They were in agreement over the need to move swiftly to ensure that we get $1,400 direct payments to middle and working-class Americans as quickly as possible.”

During former President Donald Trump’s final month in office, $600 payments were authorized under a $900 billion bill, coming after Trump wrote on Twitter that $2,000 payments should be included.

Biden and other Democrats, in the lead up to the Senate runoff race in Georgia, said that $2,000 payments would be authorized if Democrats captured the Senate, triggering confusion about whether $2,000 payments would be issued after Biden took office. Some complained that the $1,400 checks were not enough and said that the $1,400 was a broken promise.

Regarding who will get the stimulus payments is up in the air, according to Democrats who spoke with Biden this week.

“We did have a conversation about the direct payments and how those might be modified in a way to ensure they’re targeted,” Sen. Chris Coons (D-Del.) told reporters on Wednesday morning as he left the White House. “But President Biden was clear with us and with our caucus yesterday, he’s not going to forget the middle class, he’s not going to walk back from a real commitment.”

A number of Republicans in the Senate have said they don’t support the measure.

“I would predict not a single Republican will support the $1.9 trillion plan,” Sen. Mitt Romney (R-Utah) on Wednesday, according to Reuters.

Schumer previously said that Democrats would prefer a bipartisan solution but would move without the GOP to pass the measure, arguing that unemployed Americans need the stimulus assistance—along with relief for schools, housing, and state, and local governments.

In tweets over the past several days, Schumer repeatedly said that “big and bold” action is needed to take on the CCP (Chinese Communist Party) virus crisis—in an attempt to explain his rationale for passing the stimulus package quickly.

However, his agenda may be stymied by several senators in his caucus, including Sen. Joe Manchin (D-W.Va.), who on Wednesday said stimulus payments need to be targeted.

“There were people making $250,000 and $300,000 receiving checks,” he said. “And Democrats and Republicans start saying that was not our intent at all. So they’re trying to make sure it’s targeted to the people that really need it. So that’s where it’ll happen. And it will go out quickly once we get this passed.”