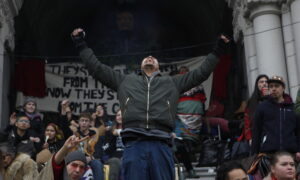 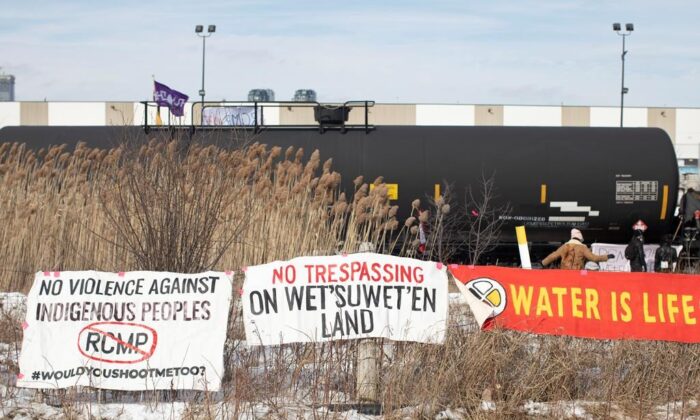 Banners hang on a fence as protesters stage a blockade of the rail line at Macmillan Yard in Toronto, on Feb. 15, 2020. (Chris Young/Canadian press)
Canada

VANCOUVER—As cabinet ministers broker urgent meetings over rail blockades in support of hereditary chiefs in northern British Columbia, a series of negotiations over the Wet’suwet’en Nation’s land rights have been quietly taking place for a year.

Prime Minister Justin Trudeau cancelled an international trip and instead held an emergency meeting of cabinet ministers Monday in Ottawa, but participants were tight−lipped about potential solutions to a series of national solidarity protests that have disrupted rail transport across the country.

Meanwhile, the B.C. government and Office of the Wet’suwet’en have been meeting on how to explore a path forward together for a year. They issued a joint press release on Feb. 7, 2019 announcing a “reconciliation process.”

Former New Democrat MP Murray Rankin, a lawyer and mediator, was appointed as B.C.’s representative to help guide and design the process just weeks after RCMP enforced an injunction last year against opponents of the Coastal GasLink pipeline, who formed a blockade in support of the chiefs outside Houston, B.C.

Coastal GasLink says it has agreements with all 20 elected First Nations councils along the 670−kilometre route, but the hereditary chiefs in the Wet’suwet’en First Nation say they have title to a vast section of the land and never relinquished that by signing a treaty.

While the self−governance talks are independent from any particular project, they take on new significance as a national debate over Indigenous land rights and sovereignty flares.

Na’moks, one of five hereditary clan chiefs, said he believes the talks could solve the impasse over the Coastal GasLink pipeline, a key part of a $40−billion LNG Canada liquefied natural gas export project.

Proper affirmation of Wet’suwet’en title rights would also affirm that Coastal GasLink must leave the territory, he said, but the implications of the negotiations are much bigger than that.

“It will give surety to all companies, it will enhance environmental laws, and our Indigenous rights—which are enshrined in the Constitution—will be a daily thing. We won’t have to go to court to remind each other,” Na’moks, who also goes by John Ridsdale, said in an interview.

At the same time, he said the talks are specifically non−transactional. In other words, don’t expect a deal in which the chiefs consent to the pipeline in exchange for a broader recognition of rights.

Although a 1997 Supreme Court of Canada case affirmed that Aboriginal title has not and cannot be extinguished by the provincial government, but fell short of identifying the specific area and boundaries where Wet’suwet’en title applies.

B.C.’s Indigenous Relations Minister Scott Fraser agreed that while the self−governance talks are not about the pipeline, they’re relevant.

“It’s a much larger issue than a particular project, we all agreed it would be a separate process,” he said.

“That being said, as we dig deeper into the conflict here, the rights and title issues come up over and over again, and that’s still an outstanding issue that we haven’t been able to address.”

Fraser said the talks have been “challenged” by the fact that the hereditary clan chiefs have designated representatives instead of participating directly themselves but Rankin continues to visit the territory about once a month.

He also clarified that the province is not seeking to impose any form of governance on the First Nation through the self-governance talks, saying it’s up to the Wet’suwet’en to determine the potential roles of hereditary and elected leaders.

While the Indian Act designated elected band councils to lead First Nations, the province’s adoption of the United Nations Declaration on the Rights of Indigenous Peoples in the fall gave the government more tools for recognizing traditional forms of governance, such as hereditary systems, Fraser said.

The province is keen to keep dialogue open with the Wet’suwet’en and the title talks began with a smoke feast attended by Fraser and Premier John Horgan last March, he said.

But just as Na’moks held strong against the pipeline, Fraser maintain his government’s support for it.

“While the Office of the Wet’suwet’en may have been strong in their position there, we are equally strong as government,” he said.

“The project was OKed years ago,” he said, adding the province approved its environmental assessment certification following extensive consultations and community meetings.

“There is no basis for shutting it down.”

Alan Hanna, assistant professor of law at the University of Victoria, said ironing out Aboriginal title and rights issues has occurred in various venues, including the courts, the modern treaty process and through broader negotiations.

While ongoing talks between the Wet’suwet’en and B.C. government may not directly address the Coastal GasLink project, he said reaching a self-governance agreement could guide what happens in the case of a future impasse.

“Through negotiation, they can determine who sits at the table, how many individuals represent each of the parties and then if they come to an impasse, who or which entity can determine the outcome.”