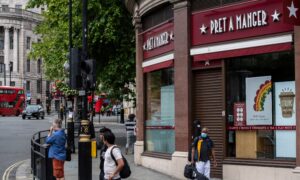 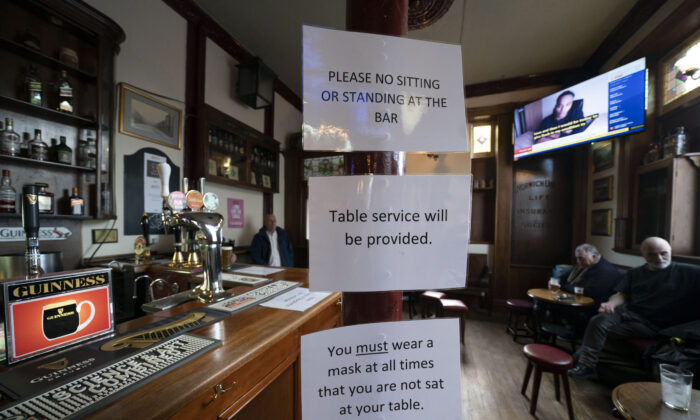 The British government has carved England into three tiers of risk in a bid to slow the spread of a resurgent CCP virus. People sit in the Dispensary pub in Liverpool, England, on Oct. 12, 2020. (Jon Super/AP Photo)
UK

The chairman of pub giant Wetherspoon said on Friday that CCP virus restrictions are “in reality, impossible to regulate” as he announced company pre-tax losses of £105 million ($135.6 million).

Revealing in preliminary results (pdf) that revenue was 30.6 percent down on last year, Chairman Tim Martin said that the scientific guidance from Imperial College that the government based its virus-related restrictions on was “deeply flawed.”

Favouring the “comparatively successful” Swedish model for tackling the virus based on “social distancing, hygiene, and trust in the people,” Martin called for more “sensible” policies for the UK.

He said the UK government by contrast to Sweden had jumped from “pillar to post” in “tightening and tinkering” with rules that produced “visibly worse” fiscal and health outcomes.

Quoting American business tycoon Warren Buffett, Martin said government actions had been led by something similar to “the institutional imperative” Warren had encountered in business that compelled companies to stay on the same course no matter what the outcome.

“Since 100 governments adopted a lockdown strategy, it was very difficult for any government to adopt a different course,” Martin said.

No ‘Obvious Basis in Science’

He said an initial re-opening of UK pubs on July 4 had been “carefully thought out”, agreed with the sector, and was at that time enabling the industry to “get back on its feet”.

Now, however, the government has “introduced, without consultation, under emergency powers, an ever-changing raft of ill-thought-out regulations,” he said.

He added that regulations have no “obvious basis in science”, and are “extraordinarily difficult for the public and publicans to understand and to implement.”

Among the most damaging restrictions for trade, Martin cited the 10 p.m. curfew, which has “few supporters outside of the narrow cloisters of Downing Street and SAGE meetings.”

The curfew meant that customers leaving environments at 10 p.m. where hygiene and social distancing were promoted went on to private gatherings making precautions “in reality, impossible to regulate,” Martin said.

He said the introduction of table service was too much of a “faff” for customers and crushed sales.

He also said that the need to wear face coverings, which offered “debatable” health benefits, when going to the bathroom but not while seated was “another capricious regulation”.

The measures drove up costs considerably making fiscal prospects for the coming year even more uncertain for pubs, he added.

Wetherspoon’s announcement comes just a day after British brewery and pub operator Marston’s said it will axe one in seven jobs, with recent restrictions—including the latest three-tier system—smothering the industry’s already struggling bounce-back.

Marston’s on Oct. 15 announced (pdf) it will lose around 2,150 pub-based workers, who are currently furloughed under the government’s Job Retention Scheme, which is set to close at the end of the month.

“The current environment of lockdowns, curfews and constantly changing regulations and announcements threatens not only pub companies, but the entire economy,” he said.