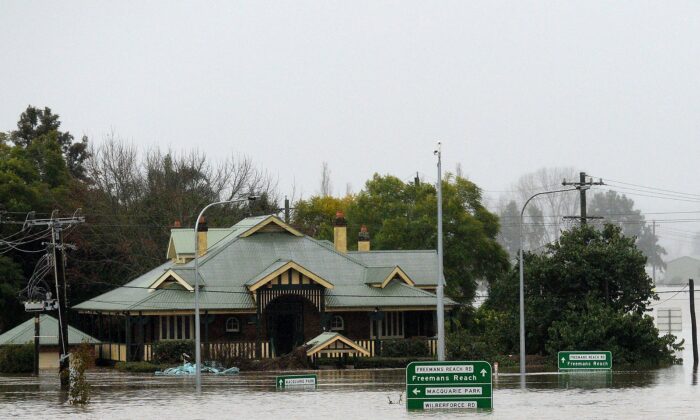 A general view of a flooded residential area next to the overflowing Hawkesbury River in Sydney, Australia, on July 6, 2022. (Muhammad Farooq/AFP via Getty Images)
Australia

Wet Weekend Sign of Things to Come to Australia

Large parts of Australia’s east coast have had a wet and windy weekend with the rain a taste of the wet summer forecast thanks to another year of La Nina.

Flood and severe weather warnings are in place across parts of Victoria, Queensland and New South Wales (NSW) as Australia’s east coast braces for another wet spring and summer.

NSW and Queensland have already copped a wet and windy weekend and forecasts predict more rain on the way over the course of the week.

But winds are expected to ease in NSW over Sunday and early Monday.

Hazardous surf warnings are in place across both Queensland and NSW as the wild weather kicks up large swells.

Meteorologists are warning of a wetter than average spring on Australia’s east coast.

The same weather conditions caused the devastating and deadly February-March floods and the recent June-July flooding.