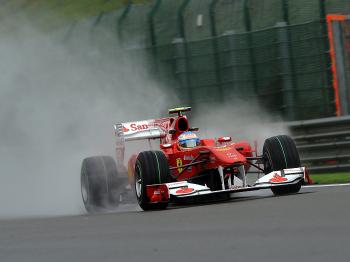 James Fish
alias for Chris J
View profile
Follow
biggersmaller
Print
A rain-soaked track at Spa-Franorchamp, Belgium, limited the amount of testing Formula 1 teams could do prior to the Belgian Grand Prix.

After the three-week summer break, the Formula 1 season resumes with the last two European Grands Prix, Belgium and Italy.

Most teams came to Spa with several new parts, designed and computer-tested over the break, ready to attach them to their cars and test them at speed. However, a rain-drenched morning and mostly wet afternoon practice session foiled the teams’ plans.

McLaren planned to bring three different front wings, looking for some balance between FIA flex regulations and the sort of (apparently) legal flexing achieved by Red Bull, and to a lesser degree, Ferrari.

Renault came to Belgium with its new F-duct bodywork, designed to deliver air to the back wing at high speeds, to lower drag and increase top speed. With only half-an-hour of dry running, Renault probably didn’t get enough information about the new parts.

After the rain abated, the session had to be red-flagged for about fifteen minutes when some spectators climbed over a fence into a restricted area.

Ferrari’s Fernando Alonso was quickest in the afternoon session, followed by Force India’s Adrian Sutil. For some reason Force India performs much better at Spa than at any other track on the schedule.

Due to the limited dry track time, none of the afternoon’s results indicate how any of the cars will perform on Sunday.

Tickets are available through the Formula1.com Tickets and Travel web page.

The race will be broadcast live on SPEED-TV in the United States.