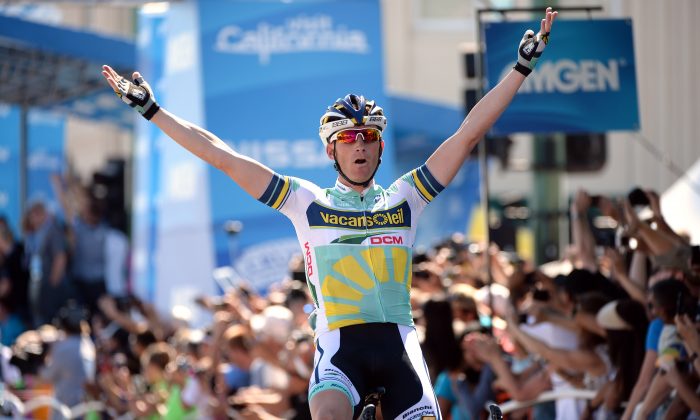 Lieuwe Westra of Vacansoleil-DCM celebrates as he wins Stage One of the 2013 Amgen Tour of California in downtown Escondido, on May 12, 2013. (Harry How/Getty Images)
Cycling

Westra Wins Stage One of the 2013 Tour of California

Lieuwe Westra of Vacansoleil made a strong surprise attack in the final five kilometers of Stage One of the 2013 Amgen Tour of California (ATOC) and survived to take the stage win, spoiling the day for the sprinters but giving Vacansoleil a great gift for the team’s first time in the Tour.

After a long chase which caught the last two riders from a four-man breakaway just five km from the finish line, Cannondale, Omega Pharma-Quickstep, and BMC were setting up for a bunch sprint when Westra exploded from the peloton, followed almost immediately by Francisco Mancebo of the 5-Hour Energy squad.

Despite five hours in the saddle in one hundred-degree-plus heat, Westra and Mancebo had enough left to escape the peloton, opening a gap of nine seconds as they passed under the flame rouge (1000-meter banner.) Westra tucked in behind Mancebo approaching the line; the Spanish rider started sprinting first but Westra had no problem catching, passing, and taking the win by several lengths.

Lieuwe Westra, the 2012 Dutch national time trial champion, used his special skill to open a gap quickly enough that the sprinters’ teams’ leadout riders couldn’t react. The 30-year-old Dutch rider has a string of World Tour, Continental, and Classic wins and podiums stretching back to 2007, including second in General Classification (by eight seconds) in the 2012 Paris-Nice race.

He started riding with Vacansoleil in 2009; 2013 was his first Tour of California as well as Vacansoleil’s.

Mancebo, 37, has twice finished third in the Vuelta a España (2004 and 2005,) and has won numerous Continental races in his long career. Riding for 5-Hour Energy presented by Kenda, this year Mancebo has won the Redlands Classic, finished second in the Joe Martin Stage Race and the Vuelta a Castilla y León, and third in the Tour of Gila. The heat, which sapped so many European riders, didn’t’ affect Mancebo quite as powerfully.

Peter Sagan of Cannondale, who won five stages in the 2012 Tour, hoped for and wanted to do the same this year, but he was thwarted. The 23-year-old Slovakian superstar had a problem with his rear derailleur just inside the five-km mark, which dropped him to the back of the peloton. Sagan had to work hard to get back to the front, but his team mates didn’t have time to set up a leadout for him in the chaos of the chase.

Sagan still managed to sprint ahead of the rest of the peloton to take third place—and the associated time bonus—by a few feet, but the bottom step of the podium is not the top step. The Cannondale rider was surely disappointed.

Notable was the absence of BMC’s Philippe Gilbert in the final sprint. The Belgian rider was struggling through the last few dozen kilometers, probably because of the heat. After spending the spring riding in cool European temperatures, the California desert was more than he could handle.

Stage One, a 165-km loop through the deserts around Escondido, included three categorized climbs, including an ascent up Mount Palomar. None of the climbs were that difficult, but he searing heat and dry air tortured the riders; temperatures topped 105 degrees during the stage.

A breakaway of three riders, soon joined by a fourth, took off fifteen kilometers into the stage. These four: Zakari Dempster of NetApp-Endura, March Cooper of Optum/Kelly Benefit, James Stemper of 5-Hour Energy, and Carter Jones of Bissell Pro Cycling, opened a ten-minute gap before the peloton even bothered to notice. That gap was cut to 7:30 by the time the quartet started the 17.5-km Cat One climb up Mount Palomar.

Dempster, who took the King of the Mountain points over the Cat Four Mesa Grande, the first climb of the day, couldn’t hold the pace up Mount Palomar.

Cooper lasted until the day’s final climb, the Cat Three Cole Grade, 36 km from the finish. Stemper and Jones pushed on, though Jones needed some encouragement from Stemper to keep taking turns up front.

This pair never quit; they rode 145 km up three serious climbs in blazing heat, and were still trying hard when the peloton swept them up five kms from the finish.

Five-Hour Energy’s James Stemper was awarded the ATOC Breakaway From Cancer Most Courageous Rider award, an added fillip for himself and his team.

Bissell’s Carter Jones captured the King of the Mountains jersey by being fourth up the first climb, wining the big one up Palomar, and taking third on Cole’s Grade even though he had dropped from the leaders.

Stage Two, 200 km from Murrieta to Greater Palm Springs, contains two climbs: the Cat One Mountain Center ascent in the San Jacinto mountains, plus a summit finish up the six-km, nine-percent Cat One climb up Tram Way.

This stage should show who is on form and ready to contest the General Classification. On top of the two hard climbs, the temperature is expected to be even hotter than it was for Stage One, so riders who showed up early to acclimatize themselves might fare better.