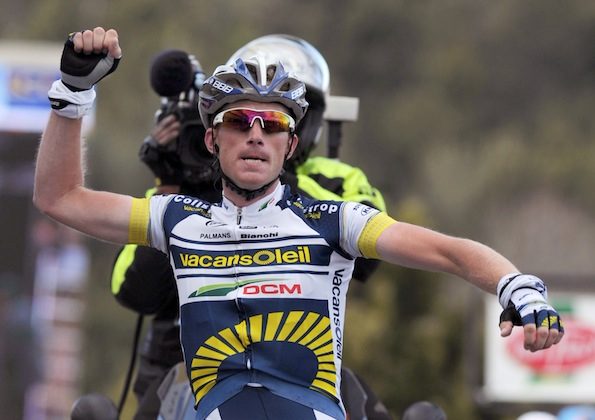 Vacansoleil’s Liuwe Westra punches the air with pride as he crosses the line to win Stage Five of the Paris-Nice cycling race. (Pascal Pavani/AFP/Getty Images)
Cycling

Vacansoleil’s Liuwe Westra put in a strong attack on the steep final climb of Stage five of the Paris-Nice cycling race, and race leader Bradley Wiggins of Sky couldn’t or wouldn’t answer. Westra advanced from sixth to second in the General Classification. Had he not eased up as he approached the finish line he might well have won the yellow jersey.

Westra rode to the win by 20 seconds, and Movistar’s Alejandro Valverde caught Wiggins at the line, taking second and moving from seventh to fourth in GC.

“I felt good in the last hour and the goal was not to lose time on the final climb,” Westra told cyclingnews.com. “But with one kilometer to go Wiggins attacked and he didn’t get away so I decided to attack myself. I took 100 meters on the group and they didn’t catch me, unbelievable!”

“The team did a great job and this win is fantastic. Until Sunday I must try not to lose time and then we will see what happens in the time trial.”

With 40 km to go, Rabobank’s Laurens Ten Dam and Astana’s Kevin Seeldraeyers tried to bridge to the breakaway. They succeeded, but by the time the two lead groups came together with 10 km left, the lead was down to 40 seconds. Two km later and all but Frederik Veuchelen had been swallowed up. The Vacansoleil rider pushed hard but got ridden down just past the three-km mark.

As the peloton hit the final climb, Sky’s Richie Porte led the peloton, with Bradley Wiggins about tenth. Wiggins moved to second wheel near the start of the climb, with Levi Leipheimer and Tejay Van Garderen following.

Riders kept falling off the back, even strong riders—Sylvain Chavanel, fourth in GC, cracked just past the 2-km mark, finishing ninth in GC.

With a kilometer to climb, perhaps a dozen riders were still following Richie Porte and Bradley Wiggins. FDJ’s Arnold Jeannesson attacked but couldn’t escape; Wiggins accelerated with Leipheimer, while Van Garderen couldn’t hang on. The young American rider dropped to sixth in GC.

As the leaders caught Jeannesson, Westra launched his attack and immediately opened a gap. Wiggins had nothing left; he was doing what he could to stay ahead of Leipheimer and Valverde.

Westra took the win, but didn’t take the jersey. Bradley Wiggins, though he said the jersey wasn’t important to him, is still race leader.