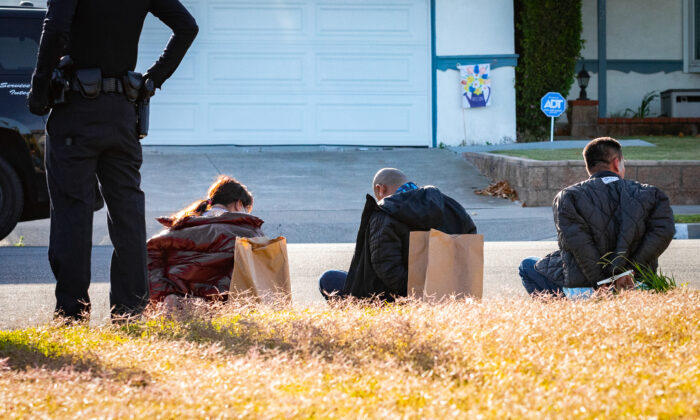 Men and women are taken into custody after being caught in an illegal gambling operation in Westminster, Calif., on May 10, 2022. (John Fredricks/The Epoch Times)
Southern California

At 5:30 a.m. over 30 SWAT and police detectives surrounded the small three-bedroom house—located in the 9300 block of Mirror Circle—immediately shooting down roof security cameras before suspects inside could see them encircling the home.

“Come out with your hands up,” a speaker blared—repeatedly on a loop—giving suspects inside a chance to surrender peacefully.

Several tried to escape. However, they immediately darted back inside once they saw they were surrounded.

Shortly after, the men and women inside slowly streamed out—their arms raised—and were swiftly handcuffed and ordered to sit in a line on the street curb.

“Our biggest win today is giving residents their neighborhood back … our detective bureau is going to crush these [slap houses] whenever they pop up in the neighborhoods,” Deputy Chief Cameron Knauerhaze told The Epoch Times.

Inside there was the overwhelming scent of marijuana, meth, stale cigarettes, and rotting food. Broken glass littered the floor.

According to Vandergrift, suspects who frequent slap houses often steal merchandise from stores, which they then bring to the house for cash “credits” to buy drugs or to gamble.

They also turn over stolen mail to slap house operators who then use the information to steal identities.

The two arrested were booked on outstanding warrants, police said.

The others were released pending further investigation.

The punishment for gambling in a slap house is only a misdemeanor of a “crime against property,” and does not warrant arrest under California Penal Code.

Officials said they are seeking additional evidence from the home—including who was behind the operation—blocking it off from further access.

“This [process] costs taxpayers so much money,” Knauerhaze, the deputy chief stated.

According to Knauerhaze, an estimated 70 law enforcement personnel will now work on the case around the clock in the following days to gather more evidence, conduct follow-up interviews, and gather intel on other slap houses, in an attempt to prosecute suspects beyond citations.

Officials estimate there are potentially 17 more such houses in the city they intend to raid. Police said suspects often go from one to the next.

In the aftermath of the May 10th raid, a man drove up to view the house and then quickly sped off.

“We’ll catch him,” Sgt. Eddie Esqueda said. “They always turn up at the next raid.”

Police have taken an active role in warning homeowners, particularly in the Vietnamese community, about the risks of unknowingly renting their homes to scammers who then convert them into slap houses.

Police Sergeant Phuong Pham came up with the idea to create newspaper and radio ads for the local Vietnamese community to warn them of the practice.

Some telltale signs, Pham said, are homes with multiple cameras outside and tenants rushing move-in dates with a false sense of urgency or refusing background checks.

“[Pham] is one of the hardest working guys you will ever meet, one of the most compassionate officers out there,” Detective Vandergrift said. “It’s never the ‘iron fist’ or the ‘tough guy’, he’s always trying to help people.”