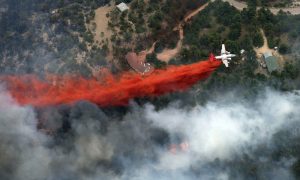 Q & A: What's Going on with the Wildfires in the US?
0
Share Now
TelegramFacebookTweetEmailTellMeWeReddit
Copy Link 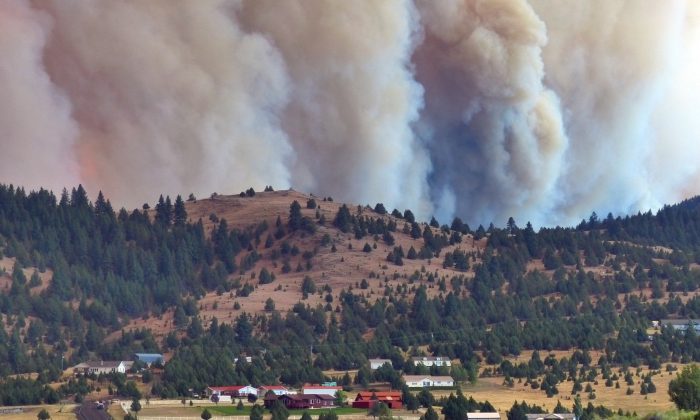 The Canyon Creek Complex fire burns towards a rural subdivision of John Day on Friday, Aug. 14, 2015.(Les Zaitz/The Oregonian/OregonLive via AP)
US

Winds are helping stoke wildfires sweeping across the West, posing problems for firefighters trying to contain the flames fed by drought.

Firefighters across the Pacific Northwest are working to protect property from fast-moving wildfires that destroyed multiple homes in eastern Oregon, cut off power in Washington and forced thousands of evacuations throughout the region. A 70-year-old woman in Idaho died while preparing to flee as a wildfire expanded east of Lewiston.

A look at conditions:

Officials revised the size of the fire downward after previous estimates put it at nearly 4 square miles.

The blaze in the Angeles National Forest above the suburbs of Glendora and Azusa was 20 percent contained and holding steady Sunday.

A half dozen campgrounds remained evacuated around the fire that burned four cabins and an outbuilding when it broke out on Friday.

Meanwhile, crews were mopping up a 189-acre fire that erupted Friday in Simi Valley, northwest of Los Angeles. The blaze, which burned on rolling hills close to subdivisions containing 500 homes, was contained Saturday without any building damage.

In Northern California, firefighters made more gains against a wildfire 100 miles north of San Francisco that forced mountain-town dwellers to evacuate for the second time in days. Wind shifts sent smoke from the fire all the way to the San Francisco Bay Area, where residents turned to social media to report the haze. The National Weather Service said smoky conditions were likely to remain in the area throughout the weekend.

Two fires have charred dry Lower Lake, the most recent burning 39 square miles of thick brush and oak trees in Lake and Napa counties. It was 82 percent contained by Sunday.

An earlier, larger fire in the same area was fully contained Friday more than two weeks after it broke out. The blaze destroyed 43 homes.

Lightning storms across northwest Colorado are being blamed for several wildfires, including one north of Craig that was estimated at 450 acres. The Bureau of Land Management says no injuries have been reported and one home was evacuated.

Firefighters say the fires were pushed in multiple directions by erratic winds from passing storms.

Smoke of wildfires fouled the air in southwest Montana as firefighters continued battling dozens of fires in the western half of the state.

Cooler temperatures on Saturday helped some, but most fires remained active thanks to erratic winds and little moisture.

The Montana Department of Environmental Quality issued an air quality alert for counties in the southwest, including Missoula, because of smoke from large fires burning in western Montana forests and grasslands.

A 70-year-old woman was killed when she fell while preparing to flee from a wildfire expanding quickly east of Lewiston, the Idaho County Sheriff’s Department said Saturday.

Cheryl Lee Wissler of Adams Grade died Friday from a head injury she sustained when she fell, authorities said.

An estimated 30 homes and 75 other structures were lost to the blaze, the sheriff’s department said. The fire is surrounding the small town of Kamiah, about 60 miles east of Lewiston, and burned to the edge of Clearwater River, directly across the water from downtown.

More than 750 people were assigned to fight several fires that together have charred more than 50 square miles in the area near Kamiah.

The region was already struggling after severe drought damaged wheat harvests, with farmers watching as their normally plump wheat kernels grew pinched and stunted from the lack of water. Though most of the wheat had been cut before the fires started, bone-dry stubble still covers the prairie and the forests surrounding Kamiah are parched.