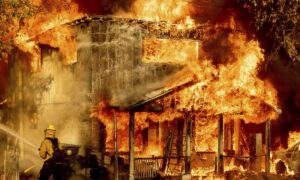 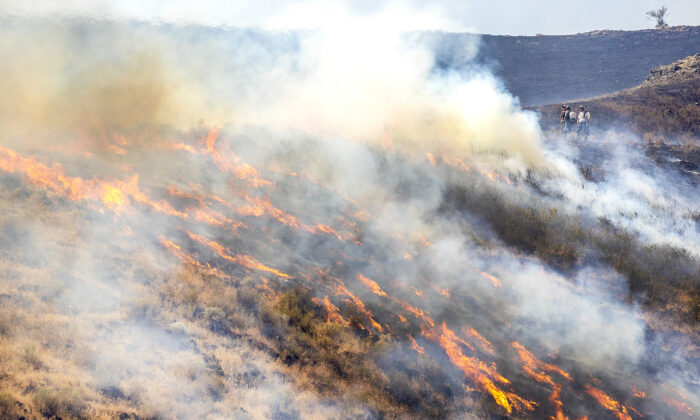 People stand behind the fire line as the flames spread through dry grasses at the Steptoe Canyon Fire in Colton, Wash., on July 22, 2021. (August Frank/Lewiston Tribune via AP)
Regional & Local News

BLY, Ore.—The nation’s largest wildfire raged through southern Oregon on Friday, but crews were scaling back some night operations as hard work and weaker winds helped reduce the spread of flames even as wildfires continued to threaten homes in neighboring California.

In Montana, five firefighters remained hospitalized a day after a thunderstorm and swirling winds blew a lightning-caused wildfire back on them, federal officials said.

The five had joined other crews working on the 1,300-acre Devil’s Creek fire burning in rough, steep terrain near the rural town of Jordan. The firefighters were building a defensive line Thursday when the weather shifted, Bureau of Land Management spokesperson Mark Jacobsen said.

Jacobsen declined to release the extent of the firefighters’ injuries but said they were still being evaluated and treated Friday. The firefighters included three U.S. Fish and Wildlife Service crew members from North Dakota and two USDA Forest Service firefighters from New Mexico.

The blaze is among a number burning across the U.S. West.

In Oregon, the Bootleg Fire has destroyed an area half the size of Rhode Island. It was 40 percent surrounded after burning some 70 homes, mainly cabins, fire officials said. At least 2,000 homes were ordered evacuated at some point during the fire, and an additional 5,000 were threatened.

The upper eastern edge of the fire continued to move toward Summer Lake, jumping fire lines Thursday and prompting an evacuation order for some portions of Lake County to be raised to “Go now!” fire officials said.

Winds up to 10 mph could drive the flames through timber but not at the pace seen last week, when the wind-driven blaze grew exponentially, fire information officer Angela Goldman said.

The fire, which was ignited by lightning, had been expanding by up to 4 miles a day, pushed by strong winds and critically dry weather.

There was good news on the lower portion of the 625-square-mile blaze. Crews had locked in containment lines and on the lower southeastern side, they were able to gain a substantial foothold, allowing them to cut back to nighttime patrols from what had been a “24-7 run-and-gun” fight, fire information officer Sarah Gracey said.

“For us, that’s a pretty big step,” she said. “It’s not that easy to work in a pitch-black forest in the middle of the night.”

On Friday, authorities said they would be keeping an eye on changing wind conditions.

“The fire continues to throw challenges at us, and we are going to continue to stay vigilant, work hard and adapt,” Joe Hessel, incident commander for the Oregon Department of Forestry Incident Management Team, said in a statement.

That side of the blaze also had burned into an area blackened by a previous fire, creating gaps in the fuel and reducing the spread of flames through grass, shrub and timber, Gracey said.

In California, Gov. Gavin Newsom issued a state of emergency for four northern counties because of wildfires that he said were causing “conditions of extreme peril to the safety of persons and property.” The proclamation opens the way for more state support.

The fire, sparked by lightning July 4 in Alpine County, has destroyed at least 10 buildings and forced the evacuation of more than 2,400 homes. That includes about 1,300 that were ordered evacuated for the first time Thursday when blowing embers ignited a new spot fire that jumped U.S. Highway 395 north of Topaz Lake on the California-Nevada line.

Pat Seekins, operations section chief for the Rocky Mountain Incident Management Team that was called in to manage the fire, said Friday they were shifting significant resources to its eastern flank along the state line. More than 1,300 firefighters were battling the overall fire, and more resources were on their way.

“We had a really active day yesterday. It was pretty severe,” he said. “It’s a very significant spot fire, and it’s going to take a lot of work. That will be a very high priority for us today.”

The Douglas County Board of Commissioners in Nevada declared a state of emergency and set up evacuation sites at a senior center and the Topaz Estates community center. Neighboring Lyon County opened one at Smith Valley High School.

Crews also continue to provide structure protection farther west in California near Markleeville, Woodfords and Crystal Springs south of California Highway 88, but the worst danger has passed there, Seekins said.

Mandatory evacuation orders were issued Friday in Butte County, California, as the Dixie Fire continued to grow explosively eastward, becoming the state’s largest wildfire so far this year. On Thursday, officials in Plumas County in the Sierra Nevada west of the Nevada line also ordered evacuations.

The fire had burned more than 223 square miles as of Friday evening, fire officials said. It destroyed at least eight buildings and threatened at least 1,500 more.