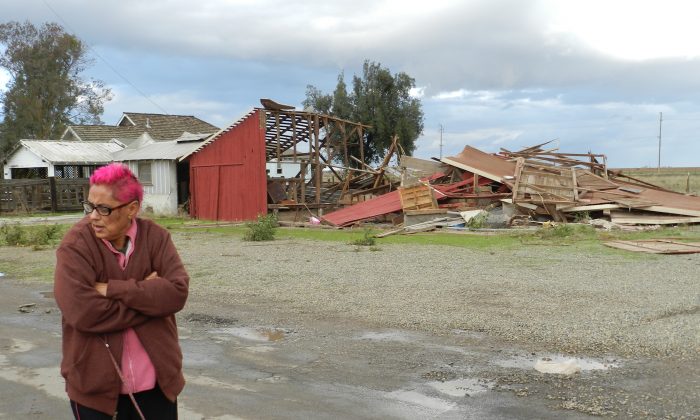 Sabina Woodard stands across the street from her destroyed barn after reports of a rare tornado in Denair, Calif., on Nov. 15, 2015. The National Weather Service said video and witness reports confirm a tornado touched down in Denair, which tore roofing and walls, knocked down trees and power lines and damaged gas lines. (Deke Farrow/The Modesto Bee via AP)
US

Western US Hit With Blast of Winter-Like Weather

LOS ANGELES—A wintry blast of air brought blizzard-like conditions Monday to parts of the West after whipping up a damaging tornado in Central California and buffeting the Los Angeles area with gusts topping 70 mph, forecasters said.

Drivers in Southern California mountain areas were urged to use caution as light snow and hail fell at elevations as low as 4,000 feet. Powerful winds knocked down branches and caused scattered power outages.

As much as 18 inches of snow was possible when Colorado gets hit later Monday, the National Weather Service said. The worst conditions were expected early Tuesday in areas south and east of Denver and on the Eastern Plains.

The storm that originated in the Gulf of Alaska could be a harbinger of El Nino, the ocean-warming phenomenon that’s predicted to bring heavy rain to the West in the coming months, said Kathy Hoxsie of the National Weather Service.

“It’s the beginning of the winter season,” she said. “We want storms. We want rain. We’ve been projecting that we’re going to have a wet winter and this is a sign that it’s going to happen.”

California in particular is anxiously awaiting winter rains as it seeks relief from its record, four-year drought. Heavy rain will bring some drought relief, but it is not expected to erase the state’s water deficit.

In Central California, a twister Sunday swept through the small town of Denair near Modesto, damaging 21 homes, including one that shifted on its foundation. The tornado toppled trees and fences, broke windows and ripped off part of a church roof.

Wind speeds exceeded 110 mph, said Eric Kurth of the National Weather Service in Sacramento. There were no reports of injuries.

Sabina Woodard said she took refuge with her husband under a hospital bed in their home as their television set and furnishings flew about.

“What I thought was a bunch of birds was a bunch of debris” being carried by the funnel cloud heading their way, she told the Modesto Bee. “It looked like a remake of that Alfred Hitchcock movie ‘The Birds.'”

Four kayakers and a dog were rescued after being dumped into 4-foot waves during windy, high-surf conditions Sunday in Marin County. They were treated for hypothermia and released.

Nearby, a 14-foot aluminum boat capsized with five people aboard. They were not seriously injured

Forecasters said up to 8 inches of snow could fall in California mountains at the 5,000-foot level, with a foot possible at the highest peaks.

A warm front was expected to drop light rain Monday in western Washington, with wetter, windier weather forecast in the days ahead across the Northwest.

The National Weather Service in Seattle said the harsher weather will likely begin on Tuesday and last into Thursday. The conditions prompted several ski resorts to set their openings.