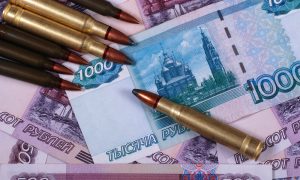 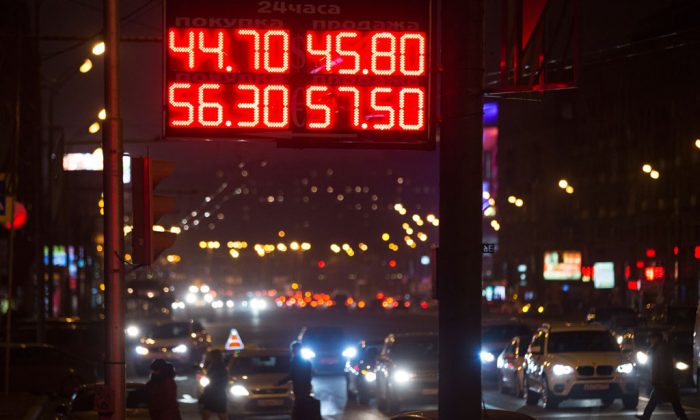 People cross a street next to a display with exchange rates in downtown Moscow on Monday, Nov. 10, 2014, showing the rate against the dollar, (top) and the euro (bottom). Russia's Central Bank on Monday scrapped its daily controls on the value of the ruble, allowing the battered currency to float freely in financial markets earlier than planned. The bank, which had planned to let the ruble trade freely starting next year, made the move as the currency has come under sustained pressure in the face of Western sanctions over Ukraine and plummeting oil prices. The ruble has lost nearly half its value against the dollar this year. (AP Photo/Pavel Golovkin)
Business

MOSCOW—Oyster Bar built a thriving business serving mollusks to well-heeled Muscovites. Then came Western sanctions, and the restaurant was forced to rechristen itself this fall. Today, it serves up burgers and pizza under a new name: No Oyster Bar.

Co-owner Ilya Sokhin said a Russian ban on European oyster imports hit hard, and the average check at his restaurant — a sleek new building in the famous Gorky Park — has more than halved.

Russia’s economy has been battered this year by uncertainty over the conflict in Ukraine, the falling price of oil, Western sanctions and retaliatory Russian import bans. Poor and middle-class Russians are increasingly challenging government insistence that a 40 percent drop in the value of the ruble — now worth a record low of 54 to the dollar — will affect mainly the rich.

Approval ratings have so far remained high for President Vladimir Putin, who has staked the reputation on Russia’s reemergence as an economic powerhouse after the turbulent 1990s. But Putin, who will give his annual state of the nation address on Thursday, faces growing anger from middle-class families and even poorer Russians as their quality of life declines.

Mikhail Antonov, a 27-year-old manager at a children’s goods store, had saved up this year to drive with friends from Moscow to Germany, and spend a week visiting Christmas markets and the countryside. But the 30,000 rubles he has saved up have gone from being worth 670 euros ($830) at the start of the year to less than 450 euros ($560) today, and he has canceled the trip.

“This would have been my first trip abroad and my girlfriend and I had saved up,” he said. “Now because of the situation in Europe and Ukraine, everything has gotten more expensive and our savings have been reduced to nothing.”

According to Vladimir Kantorovich, vice president of Russia’s Tour Operator Association, travel abroad for the winter holidays is down 30 percent, and trips to Europe have fallen about 50 percent. On Wednesday, Russia’s flagship airline, Aeroflot, hiked its ruble-denominated prices by 15 percent.

Olga Kupriyanova, a 35-year-old law professor at Moscow State University, says her family of four feels the pinch particularly when it comes to putting food on the table. Inflation is estimated to reach 10 percent by early next year, and food is rising fastest. According to the Federal Statistics Service, chicken costs 27 percent more than it did last year, pork 25 percent, and the beloved staple of buckwheat 48 percent. Russians on average spend about 30 percent of their income on food, compared with 6.7 percent in the United States.

“We’ve started to economize on food, but nonetheless because of rising prices our expenses have grown by about 10 percent,” said Kupriyanova, who has replaced red meat with chicken and cut most cheese and fish out of the family’s diet.

Russia’s economic woes stem from a trifecta of problems. First, oil and gas exports, which finance half of Russia’s budget, have been hit by the plummet in world markets: the global price of crude oil has fallen some 25 percent since the summer. Renaissance Capital analyst Oleg Kouzmin says if prices stay there, Russia could see its economy shrink by 3 percent next year.

Second, Russia’s banks, which were slapped with sanctions this summer as a response to Moscow’s role in Ukraine, have to pay off $90 billion in external debt before the end of 2015, which is becoming harder by the day as the ruble loses value. The central bank had tried to support the ruble but after spending $29 billion in October alone it gave up and floated the currency last month.

Finally, Russia banned Western meat, dairy, vegetables and fruit this summer in response to the sanctions, helping drive the steep spike in prices.

On Tuesday, Russia’s economic development ministry revised its economic forecast for 2015, predicting a drop of 0.8 percent instead of 1.2 percent growth. Finance Minister Anton Siluanov has said the sanctions are costing Russia $40 billion a year, and falling oil prices another $90-$100 billion.

Politicians and state-run television have pushed a narrative that only the rich will be affected by the depreciation of the ruble. But slowing growth and rising inflation have affected average Russians like Kupriyanova and Antonov, who both earn less than the average Moscow salary of 50,000 rubles a month, now worth about $925.

“Politicians are trying to make the best of the situation, but this attacks low-income households more than middle- and high-income households,” said Konstantin Sonin, an economist at Moscow’s Higher School of Economics. “They spend more on consumption and food, and they are the most vulnerable.”

Putin’s ratings remain high, with a recent poll by the independent Levada Center showing over 50 percent of Russians would vote for him if elections were held tomorrow. But he is coming under increasing pressure to act.

One joke making the rounds on Russian social media: “What do Putin, the price of oil, and the ruble have in common? They’ll all hit 63 next year.”

From The Associated Press. Alexander Roslyakov contributed to this report.