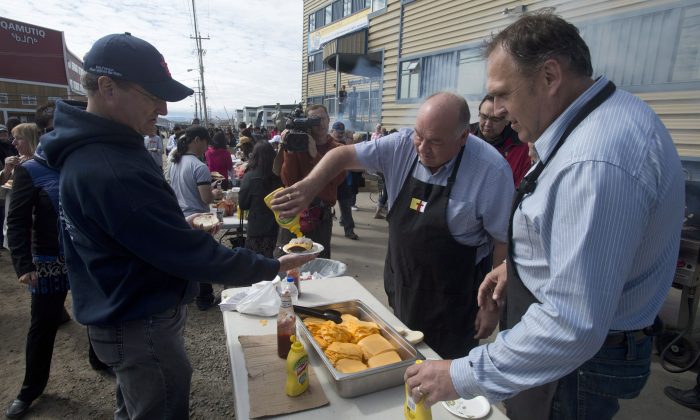 Yukon Premier Darrell Pasloski (R) and Northwest Territories Premier Bob McLeod serve a man a hamburger during Nunavut Day celebrations on July 9, 2014, in Iqaluit. The premiers of six western provinces and territories are in Nunavut for a gathering expected to focus on natural resources development and its impact on northern and remote communities. (The Canadian Press/Adrian Wyld)
Canada

Western Premiers in Iqaluit to Discuss Impact of Development on North

IQALUIT, Nunavut—The premiers of six western provinces and territories arrived Wednesday in the Arctic boom town of Iqaluit, Nunavut, for a gathering expected to focus on natural resources development and its impact on northern and remote communities.

They couldn’t have picked a more appropriate place for the discussion than the Nunavut capital, a ramshackle Baffin Island town of almost 7,000 that has a Wild West feel—bustling with new construction even as it grapples with an array of social ills and a dearth of infrastructure.

The indigenous, traditionally nomadic Inuit are struggling to cope with Arctic development, fearing a loss of their way of life. They’re plagued by high levels of suicide, homelessness and substance abuse, in Iqaluit and elsewhere in the vast territory.

“When the mining gets going up here, it’s going to make the tarsands look like ‘The Flintstones,'” said Allan Mullin, a New Brunswick-born contractor who’s built several houses in Iqaluit but decries the lack of social housing for the impoverished Inuit.

“The Inuit is going to suffer like crazy. They haven’t had the chance to adapt.”
Iqaluit is the gateway to Inuit homelands that are being increasingly exploited for natural resources.

Natural Resources Canada recently made public an exhaustive report on Canada’s changing climate that makes clear the federal government is accepting that climate change is dramatically opening up the Arctic.

Climate scientists say the planet is warming at such an extent that the so-called Northwest Passage may be ice-free within the next 40 years, making vast oil reserves increasingly accessible.

There’s already resistance from the Inuit on several fronts.

Late last month, the National Energy Board approved energy exploration in offshore Arctic waters, including seismic testing, despite howls of protest from Inuit communities, where there are grave concerns about about the risks posed to whales, walruses, seals and other wildlife.

“Our community is really concerned about the whales and the noise it’s going to create,” Clyde River Mayor Jerry Natanine told the Nunavut News.

“A few years ago, lots of narwhal got stranded in the ice, and it turns out they were doing seismic testing in Greenland at the time.”

The Baffin Bay hamlet of Clyde River, a two-hour flight north of Iqaluit, also recently turned down cruise ships that had hoped to weigh anchor in the community. The hamlet council raised concerns that the presence of ocean liners would disrupt wildlife and pollute the environment.

Tourism is a burgeoning industry in the Arctic. But cruise ship operators have complained about the cost and red tape involved in operating in Canada’s North.

“The Canadian Arctic is considered one of the most cumbersome, expensive, and problematic regions in the world for expedition cruise operators,” the Association of Arctice Expedition Cruise
Operators recently warned in an open letter to federal and territorial officials.

By comparison, the association noted, neighbouring Greenland is much more welcoming.

Amid those tense relations between those who hope to capitalize on a newly accessible Arctic versus the indigenous people trying to protect it, Nunavut Premier Peter Taptuna was slated to greet his counterparts from British Columbia, Alberta, Saskatchewan, Manitoba, the Northwest Territories, and Yukon.

They’re meeting at a hotel overlooking Iqaluit’s historical Frobisher Bay—a cove that shipping companies have bitterly complained hasn’t been updated since English explorer Martin Frobisher discovered it in 1576 in search of a Northwest Passage.

Shipping companies are forced to do sealifts on the beach and are at the mercy of the 10-metre tide and inclement weather, a state of affairs that has occasionally made it impossible to drop off much-needed supplies to the town.

The Frobisher Inn also overlooks a garbage dump fire that’s been smouldering since May, occasionally sending puffs of acrid smoke over a community alive with activity, including Inuit children playing on the town’s icy beaches and alongside the craggy creeks that empty into the bay.

The arrival of the premiers coincides with Nunavut Day, which marks the creation of the territory in 1993. Townsfolk were out in force celebrating the day, enjoying traditional foods that included seal meat, whale meat, bannock, and Arctic char.