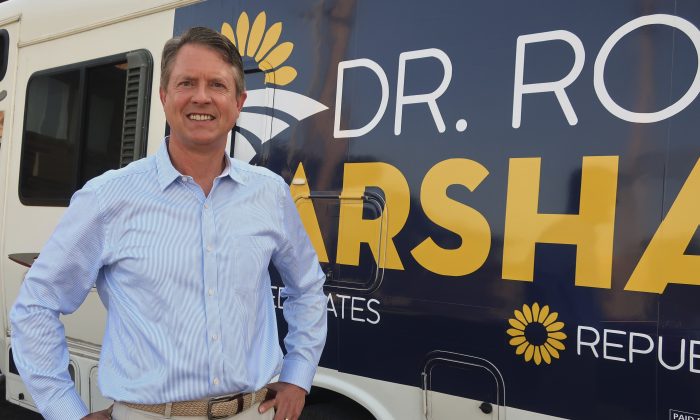 Marshall, who has been a doctor for over 25 years and a two-term congressman, made the announcement at the Kansas State Fair.

“I’m running to protect our way of life in Kansas; our values; our jobs; our children; our farms, our ranches, and our dairies,” he told the crowd during the announcement.

“You can tell what kind of senator I’ve been from the kind of Kansan I’ve been. I grew up here in Kansas, served my country and then served my community by having the honor of performing the most humbling act of all, bringing human life into the world most every day for 25 years,” he added.

In a campaign video posted on Twitter and other social media platforms, Marshall highlighted his pro-life position, support for farmers, the Second Amendment, and his close relationship with President Trump.

“Nobody is more pro-life or pro-Second Amendment than I am,” Marshall said during the campaign launch event. “Am I a kinder, gentler voice? Probably. Am I going to work across the aisle to solve problems? You bet.”

I’m running to represent Kansans in the U.S. Senate. I’d be honored by your support.

Roberts announced on Jan. 4 that he won’t seek re-election, the Associated Press reported.

Marshall pitched himself to fellow Republicans as a pragmatic conservative who can keep the seat in GOP hands by thwarting immigration hardliner Kobach’s bid for the party’s nomination.

Many Republicans fear a repeat of last year when Kobach narrowly won a crowded GOP primary only to lose the governor’s race to Democrat Laura Kelly.

Some prominent Republicans have been nudging Secretary of State Mike Pompeo to jump in, though he has not indicated whether he might enter the primary, The Hill reported.

“I spend my days focused on delivering American foreign policy around the world, every hour, every day. That’s what I’m doing. I never vary from that,” he said in one local interview.