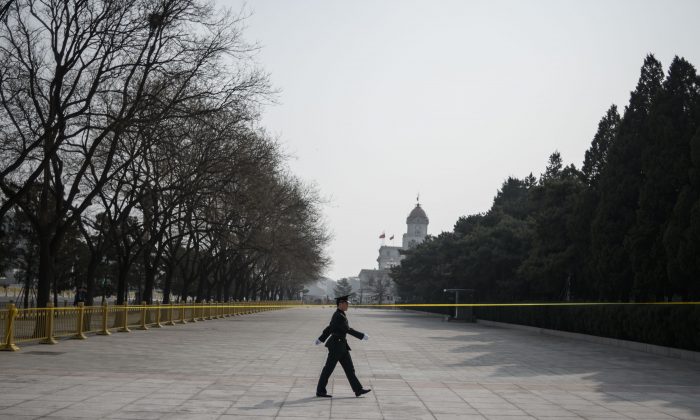 A Chinese soldier walks in front of the Great Hall of the People on the eve of the opening session of the Chinese People's Political Consultative Conference in Beijing on March 2, 2019. FRED DUFOUR / AFP
Viewpoints

The Chinese Communist Party is increasingly asserting its role as the leader of the international communist movement.

Their itinerary was reminiscent of the Stalin-era tours when credulous wide-eyed Western communists swallowed state-generated statistics extolling the fantastic productive capacity of Russian collective farms and factories and the never-ending improvements in the lives of socialist workers.

According to People’s World:

“Since reform and opening up, more than 700 million people have been lifted out of extreme poverty, contributing to more than 70 percent of the world’s poverty reduction during that period.

“1.3 billion people are covered by medical insurance, around 97 percent of the total population.

“Women account for 52 percent of high school students, 55 percent of online entrepreneurs, and 70 percent of employed workers, and the government provides subsidies for child care.

“Life expectancy has grown to 76.7 years old from 36 years when the People’s Republic of China was founded.

“Some 900 million people are covered by pensions.

“By the end of 2020, the CPC has promised to eliminate extreme poverty, to make sure no one has to worry about food and clothes and to guarantee access to education, medical care, and housing.”

But, like communists everywhere, the Chinese have a pre-arranged excuse in case the plans don’t work out quite as well as expected.

“At the same time, the trade war with the U.S. have created downward pressures on the economy and contributed to constraints on public revenue.”

The delegates also met with the All-China Women’s Federation and the Communist Youth League of China.

“They also exchanged their ideas during a party-to-party ‘fraternity seminar,’ and a meeting with the International Department of the CPC,” People’s World reported.

Yuan Li, the Communist Youth League of China’s director of international affairs, told the delegates, “We never deny that China has its own problems, but we are doing everything we can to tackle these problems. We want to work together with people in other countries, with different parties, to tackle some of the problems we face together.”

A highlight of the visit was the 27th Wanshou Forum in Beijing on Feb. 28. The forum was on the topic of “building a community with a shared future for mankind and development of socialism in the world.” It was co-hosted by the IDCPC and Renmin University of China.

Juha-Pekka Vaisanen, chairperson of the Communist Party of Finland, told the assembled delegates: “Together with forces invited here in Beijing and other progressive ones still to join—Yes we can, and we will fight against capitalism. … All our movements; workers movement, anti-fascist, internationalist, ecologist, gender and sex emancipation, feminists’ and communists’ movements have a history of own struggle. Together we can open a new path to new structures of societies—socialism of the people and the future.”

The UK was represented by Joti Brar and Edward Reynard of the openly Stalinist Communist Party of Great Britain (Marxist-Leninist) (CPG-ML).

Brar, who serves as the CPG-ML vice chair, is a member of the Stalin Society, which is notorious for denying Soviet responsibility for the murder of 20,000 Polish leaders at Katyn Forest in April 1943 and for the deliberate mass famine in Ukraine, which took up to 10,000,000 lives in 1932–33.

Renyard (aka Edward Woollard) serves as national organizer for the CPG-ML. In 2011, Woollard, as he was then known, was sentenced to 32 months imprisonment for throwing a fire extinguisher off a seven-story London building into the crowd below during a riot against student fees. Fortunately, no one was seriously injured.

It’s inspiring to know that our future is in the hands of such fine people.