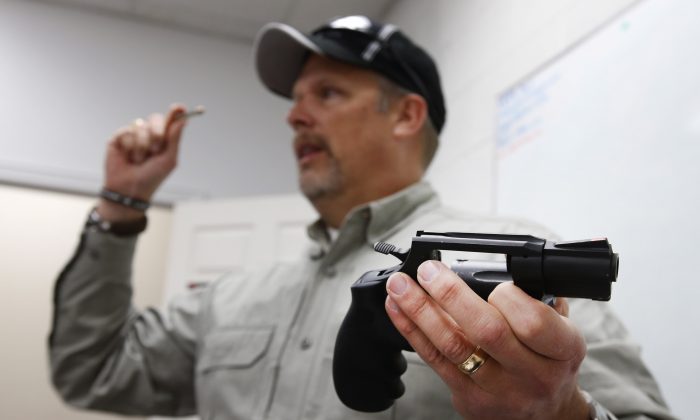 Gun instructor Mike Stilwell, demonstrates a revolver as as he teaches a packed class to obtain the Utah concealed gun carry permit, at Range Master of Utah, on January 9, 2016 in Springville, Utah. (George Frey/Getty Images)
US

Adults in West Virginia will soon be able to conceal carry a handgun without a permit or prior training, after the state legislature overrode the governor’s veto on the issue, the Gazette Mail reports.

“I urge you to look around this room for a moment and see that law enforcement are concerned about this bill,” governor Earl Tomblin said on Thursday. However, both chambers of the state legislature voted to swiftly override his veto.

I can hear freedom knocking on the doors in West Virginia.
— Sen. Craig Blair

“The constitutional authority to carry a weapon is inherent in our Second Amendment,” Senate Majority Leader Mitch Carmichael said Friday.

Legislators also cited the potential crime-deterring effects of the bill, which will increase the penalty for committing a crime with a gun and for felons who illegally carry a gun.

“We’re giving the people the ability to protect themselves without paying a fee,” Sen. Craig Blair said. “I can hear freedom knocking on the doors in West Virginia and that’s exactly what this does.”

Adults between the ages of 18 and 21 would still need to get a permit for concealed carry, but the state will now provide a $50 tax credit for anyone who gets the necessary training needed for a permit.

The law will go into effect in late May, and will make West Virginia the seventh state to allow concealed carry without a permit, along with Alaska, Arizona, Arkansas, Kansas, Maine, Vermont.