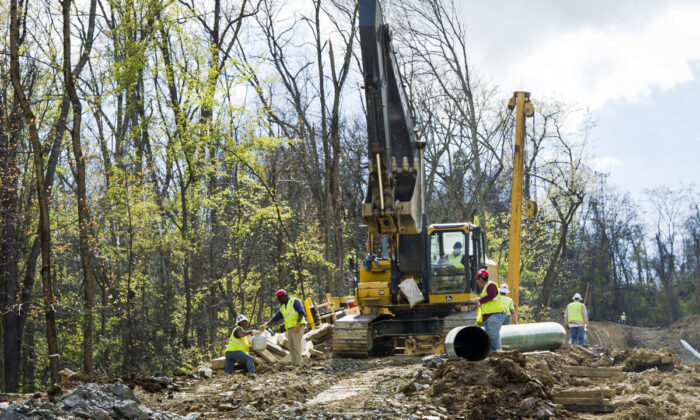 Workers lay the pipes of a gas pipeline outside the town of Waynesburg, Penn., on April 13, 2012. (Mladen Antonov/AFP via Getty Images)
Regional News

“State 401 [Water Quality] Certification … is granted subject to the conditions contained in Attachment A. Certification shall be effective 15 days from the date of this letter,” Katheryn Emery, the acting director of the state’s Department of Environmental Protection (WVDEP), wrote in a letter (pdf) to the U.S. Army Corps of Engineers.

The conditions the WVDEP listed include minimizing in-stream operation of equipment, storage and refueling areas not being located within any surface water body, etc.

The Mountain Valley Pipeline Project is a natural gas pipeline—approximately 304 miles in length and 42 inches in diameter—to supply local distribution companies and industrial users, and power generation facilities in the mid-Atlantic, southeastern, and Appalachian regions. The pipeline traverses 11 counties in West Virginia and 6 counties in Virginia.

The project is being constructed and is owned by Mountain Valley Pipeline LLC, which is a joint venture of several companies including EQM Midstream Partners, LP, and Con Edison Transmission Inc.

The pipeline still has several hurdles to clear ahead. It needs dredge-and-fill permits in West Virginia from the U.S. Army Corps of Engineers.

In Virginia, the state Water Control Board allowed the infrastructure to cross streams and wetlands. However, the decision has been challenged in the 4th U.S. Circuit Court of Appeals, the Associated Press reported.

Some environmental advocacy groups said the decision by the WVDEP is disappointing and urged the Biden administration to kill the project.

“Contrary to robust evidence that the MVP cannot be built without violating state water quality standards—and despite the company’s wretched environmental track record—the West Virginia’s DEP has regrettably granted MVP new permission to pollute,” Appalachian Voices Virginia Policy Director Peter Anderson said in a statement. “We hope the Biden administration listens to the thousands of members of the public who oppose this project and finds that more water pollution in service of an unneeded project is not in the public interest.”