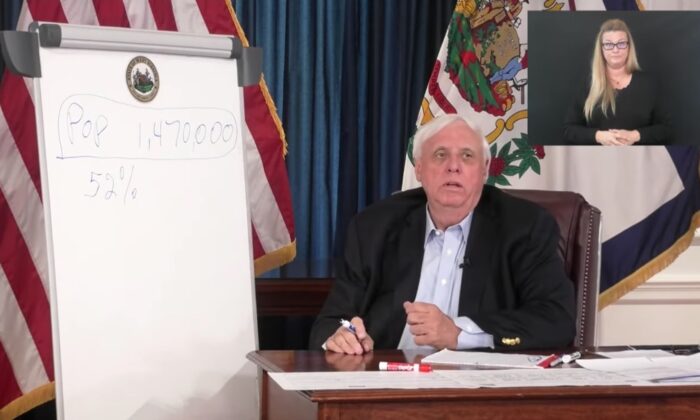 The announcement was made during a Friday press conference led by Justice alongside state Senate President Craig Blair, House Speaker Roger Hanshaw, and Delegate Gary Howell.

“We’ve got it going on right now in West Virginia. We are knocking it out of the park. Why wouldn’t you want to come?” Justice said during the press conference.

“We want everyone to know that we are standing here with open arms. We welcome these counties and would be tickled to death to have them and the great folks of that incredible state,” he added.

Justice emphasized conservative values supported by West Virginia leaders that have attracted the attention of Republican lawmakers and voters in the three western Maryland counties of Garrett, Allegany, and Washington.

The three counties include a population of more than 251,000 people according to information from the press conference.

“Our state supports personal freedoms, we value the Second Amendment, and we love the rights of the unborn. We love and embrace our energy industry,” Justice said.

“Moving to West Virginia means job opportunities like crazy and a chance to live in paradise. No matter where you’re from, we’d love to have you in West Virginia,” he added.

The governor noted during the press conference he plans to call a special session of state legislators to discuss a resolution to make the state’s offer official.

“Because of the hard work that we’ve done over the last few years to make West Virginia a better place, we’ve been growing and regrowing in our state,” he added.

“We certainly would be more than accommodating and happy to open our borders and open our arms and our state to our friends elsewhere around the borders of our state who may wish to see themselves aligned with West Virginia instead of where they find themselves today,” Hanshaw said during the press conference.

The plan for the three Maryland counties to join neighboring West Virginia is not the first time another state’s residents have sought to join the state. In 2020, some counties in neighboring Virginia proposed joining their western neighbor.

The movement, termed “Vexit,” drew much opposition from Virginia voters. The proposal soon dropped in popularity as the nation shifted focus to the coronavirus pandemic in 2020.