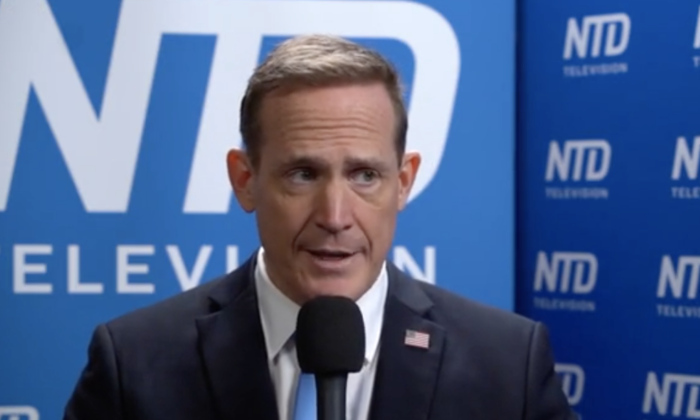 Congressman and candidate for the U.S. Senate Ted Budd (R-N.C.) said it’s too late for the most severe sanction to be used to mitigate the Ukraine crisis because the U.S. and Europe are too dependent on Russian energy.

The North Carolina Rep. criticized the Biden administration’s cancellation of the many American energy projects, including the Keystone XL pipeline, which Biden halted through executive order soon after taking office.

“Well, he already shot himself in the foot when it comes to what he did with the Keystone pipeline, we need to make sure that we are a net energy producer so that we can export to places like Germany. They’ve gone on such a green energy plan that 78 percent of their energy has to be imported.”

According to U.S. Energy Information Administration, “Europe is Russia’s main market for its oil and natural gas exports, and by extension, Europe is its main source for revenues.”

In addition, data from the EIA show that the United States increased its oil imports from Russia by about 28 percent in the first 11 months of 2021, while doubling the amount of crude oil it imported from Moscow.

Leaders from Europe, the United Kingdom, and the United States issued a joint statement on Feb. 26, unveiling further sanctions against the Kremlin which include sanctioning some of the Russian banks.

The United States and its allies have so far, stopped short of sanctioning Russia’s massive energy sector for concerns over exacerbating already high oil and gas prices.

“And right now, they realize the sanctions that we’ve put out on Russia, were not on petroleum,” said Budd.

“But had we been stronger producing our own petroleum, had Biden not had such an anti-energy, platform, and direction, and such a pro-leftist progressive, radical environmentalism agenda, over the last many months, then we would have been stronger and better positioned to sanction their energy, which is nearly their sole source of income in Russia,” said Budd.

Besides being dangerously dependent on Russia for energy, Budd believes the chaotic withdrawal from Afghanistan emboldened America’s many adversaries around the world.

“It really opened the door to not just the Ukrainian crisis that we’re seeing with Russia invading, but it also it emboldened Iran, that spinning up their centrifuges, emboldened North Korea test ICBMs, its emboldened China now that those in … the South China Sea and … Taiwan Strait, they’re tremendously concerned, and it’s just leading to a very aggressive posture for those that are not a force for good in this world,” Budd said.

In particular, Budd said that it will be very important to keep an eye on what China does because the Chinese Communist Party is watching how the West deals with Russia invading Ukraine.

“But we have to make sure we don’t take our eye off the ball of China, especially with the One Belt, One Road initiative, and they’re on a plan for 2030. I mean, it’s a very aggressive posture, and they’re going to use the cover of the drama of Russia to move aggressively as they have,” said Budd.