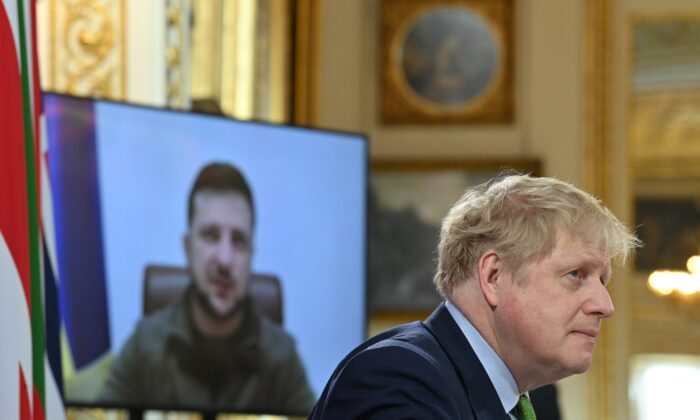 The West must do more to help Ukraine in its effort to resist Russian aggression, British Prime Minister Boris Johnson has said.

Johnson made the remarks in London on Tuesday while hosting a meeting of the Joint Expeditionary Force (JEF), an alliance of northern European nations including Denmark, Finland, Estonia, Iceland, Latvia, Lithuania, the Netherlands, Sweden, and Norway.

The UK government on Tuesday announced sanctions against a further 350 Russian individuals and entities, bringing the UK in line with measures already announced by the European Union.

Addressing the JEF meeting via video-link, Ukrainian President Volodymyr Zelensky said he welcomed Western sanctions but they “are not enough” to end the Russian aggression, calling for a full trade embargo.

He also urged the JEF countries to supply more weapons, as the shipments of supplies from the UK and other nations were being rapidly used up.

Johnson told Zelensky, “You challenge us, quite rightly, to do more and we all know that we can and we must do more.”

He said, “I hear your point very loud and clear about the economic sanctions that we need to tighten, where we need to go harder on the banks, on Swift.”

He acknowledged it is a “desperate moment” and “we must try to do more, particularly to support you in protecting the Ukrainian people from bombardment from artillery and by aviation.”

The UK has already said it is planning to send Starstreak anti-aircraft missile systems to Ukraine.

Among the individuals added to the UK’s sanctions list on Tuesday are 51 Russian oligarchs and their families, plus a raft of politicians.

Russian oligarchs now subject to UK sanctions include Mikhail Fridman, Pyotr Aven, and German Khan. The UK Foreign Office said the oligarchs sanctioned on Tuesday have a combined estimated worth of more than £100 billion ($130 billion).

UK Foreign Secretary Liz Truss said: “We are going further and faster than ever in hitting those closest to Putin—from major oligarchs, to his prime minister, and the propagandists who peddle his lies and disinformation. We are holding them to account for their complicity in Russia’s crimes in Ukraine.

“Working closely with our allies, we will keep increasing the pressure on Putin and cut off funding for the Russian war machine.”

Further general economic sanctions were also announced on Tuesday, with the export of high-end luxury products to Russia being banned and import tariffs hiked on hundreds of goods, including vodka.