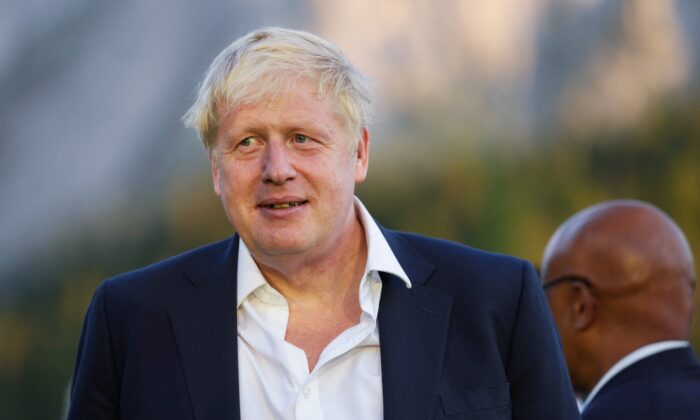 West Must Break Russian Blockade to Get Grain out of Ukraine, Boris Johnson Tells G-7

British Prime Minister Boris Johnson has called on Western leaders to take urgent action to break the Russian blockade and help Ukraine ship its grain exports out of the country.

According to the UK government, 25 million tonnes of corn and wheat—the entire annual consumption of all the least developed countries—cannot be exported and is currently at risk of rotting in Ukrainian silos, putting 47 million people around the world on the brink of humanitarian disaster.

Speaking at the G-7 summit in Germany on June 27, Johnson said the military situation is “very difficult,” but Kyiv’s forces have demonstrated an “incredible ability to push back.”

Johnson wants an international solution to get grain out of Ukraine by sea, something which is currently blocked by Russia’s Black Sea fleet and mines deployed by both sides in the conflict.

He played down the prospect of the Royal Navy being sent in to help merchant vessels beat the Russian blockade, but said British expertise in “remote de-mining” and insurance of commercial shipping in contested waters could help vessels get the grain out by sea.

At the summit, the UK also pledged £10 million ($12 million) to repair damaged Ukrainian rail infrastructure to create an overland route to get grain out of the country.

In his speech, the prime minister stressed there is unity among the G-7 nations.

“I think everybody came to the G-7 in Germany, really hearing a lot about Ukraine fatigue, the anxieties of other countries around the world about the continuing war, the effect on food prices, on energy prices,” he said.

“And what’s really struck me in the last couple of days has been the amazing consistency of our resolve, the continuing unity of the G-7.”

Ukrainian President Volodymyr Zelenskyy, who addressed the G-7 leaders in private via video link, said he would urge the leading democracies to supply him greater firepower.

Ahead of his speech, Zelenskyy said he would demand extra defence systems to combat the missile bombardment suffered by Kyiv and other cities in the days before the summit.

“We talk about this every day with our partners. There are already some agreements. And partners need to move faster if they are really partners, not observers,” he said.