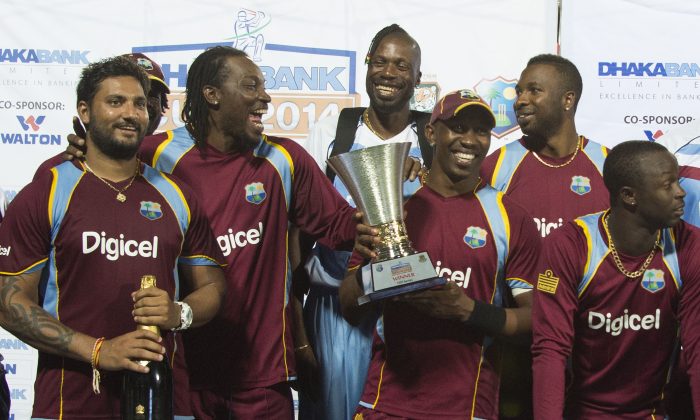 The West Indies team poses with the Dhaka Bank Cup after winning the One Day International series between the West Indies and Bangladesh 3 to nil at the Warner Park cricket ground in Basseterre, Saint Kitts and Nevis, August 25, 2014. (Jim Watson/AFP/Getty Images)
Americas

The West Indies will take on Bangladesh in 2 Test series this month, with the first starting on Friday.

The match will be broadcast on ESPN in the Caribbean and BTV in Bangladesh.

Live streaming will be available through Watch ESPN and BTV.

Bangladesh has replaced Sohag Gazi with left-arm spinner Elias Sunny for the two Test series, with Sunny telling a local newspaper that he’s “quite happy” to be called up to the national team.

Meanwhile, Bangladesh coach Chandika Hathurusingha told ESPN that he believes the batsmen will have strong play during the series.

“Our realistic goal would be to draw the game,” he said. “If we play well, bat well, we will be in the game. Our bowling stock is limited. We must look to bat deep and bat long, score runs and be in the game.”

The current odds for the series winner are 1/3 for West Indies, 5 for a draw, and 12 for Bangladesh.

ESPN notes that West Indies have far more to play for because they are looking to win both Tests, and are also looking to bounce back from the 2-1 defeat to New Zealand in their only Test series of the year so far.

“Denesh Ramdin would like to use some of his ODI form in this series, his second as captain. The 169 in the second ODI aside, he has been in fairly good form since 2012, having struck three centuries and as many fifties in Tests. He would also be inclined to rely on Chris Gayle, Shivnarine Chanderpaul and Darren Bravo to hold the batting together,” it said.

“Younger batsmen like Kraigg Brathwaite and Jermaine Blackwood would be expected to settle in with big scores, having done well against Bangladeshi sides in the recent past.”

West Indies beat Bangladesh in all the ODIs in their 3 ODI series last month, following the Test series loss to New Zealand.

Following these two Test series against Bangladesh, the Windies are scheduled for a tour in India starting on Wednesday, October 8.