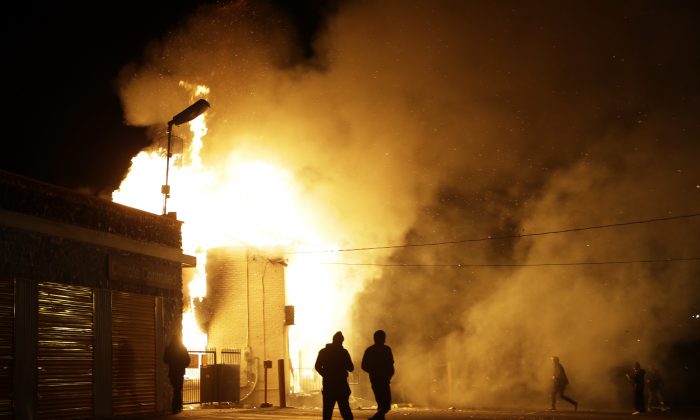 People walk away from a storage facility on fire after the announcement of the grand jury decision Monday, Nov. 24, 2014, in Ferguson, Mo. A grand jury has decided not to indict Ferguson police officer Darren Wilson in the death of Michael Brown, the unarmed, black 18-year-old whose fatal shooting sparked sometimes violent protests. (AP Photo/Jeff Roberson)
Ferguson

A number of establishments on West Florissant Avenue in Ferguson, Missouri have been burned down or looted on Monday night into Tuesday morning.

The widespread action taken was sparked by the decision not to indict Darren Wilson, the police officer who killed Michael Brown.

The buildings burned down include The Original Red’s BBQ, whose owner just recently reopened following the first wave of riots weeks ago.

“I’m going to stay,” Varun Madaksira told the Washington Post about a month ago. “People are now saying how Ferguson is unsafe, you should be scared to go to Ferguson. My mother in India was never worried before, but now she’s scared. And the more they say those things, the more I want to show this community has good people.”

Auto Zone on Florissant Chambers Laundrymat on nearby Chambers Road is also among the businesses that have been reported on fire. In fact, some reports indicate that the majority of businesses are on fire.

And gunshots have occurred in the area, injuring multiple people, with at least one victim reported at the McDonald’s.

The activity prompted the heavy armed police to enter the area.

“Cops just raised rifles at car load of people with hands up near west Florrisant and chambers,” reported James Queally of the Los Angeles Times.

“We ain’t get no justice … So they ain’t getting no peace,” one resident told him.

Officers are threatening to arrest residents and reporters for being on the street.

David Carson of the St. Louis Post-Dispatch added that the damage on West Florissant is “wide spread.”

“Scene on West Florissant now safe enough for fire dept to begin putting out fires,” he added soon after, at about 12:40 a.m.

[View the story “wf” on Storify]