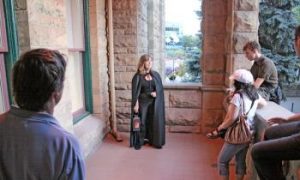 LOS ANGELES—United States District Judge George H. Wu sentenced Peter Jerald Frommer, 35, of Santa Barbara, to nine years in prison for a Ponzi scheme he operated which defrauded 64 investors of over $8 million. The court required restitution of $8.1 million to the investors. The total sum invested in the scheme was more than $15 million. Both the FBI and the IRS investigated the crimes.

Frommer’s operation started in early 2004 and ended in Aug. 2006. He called his scheme Frommer’s Cap “X” and Cap Exchange investment funds. Investors’ money was ostensibly to be used to purchase distressed property, such as office and other equipment and then resell the material for lucrative profits. Instead, Frommer was using the money to live a lavish lifestyle in his $20 million Malibu residence, as well as to make Ponzi payments to his victims, according to a statement from the FBI.

Once investors were recruited, Frommer would offer additional opportunities for other investments. These ranged from wireless Internet to auto parts and real estate ventures. These were also determined to be bogus ventures according to a release from the California Department of Justice.

The suffering of the unwitting investors was part of the prosecutors’ presentation to justify a stiff sentence in this case. A letter from one of Frommer’s investors called him the West Coast version of Bernie Madoff, according to a statement from the FBI. Prosecutors used the victims’ statements in court.

“The effects of Peter Frommer’s crimes have been devastating for me. The only event in my lifetime that was worse was the death of my child.”

“A close relative of ours introduced us when my family and I were in California seeking cancer treatment for our youngest son. In a moment of weakness, when we were struggling with the cost of his cancer treatment, we were duped and convinced ourselves, our adult children, and a sister that this was a smart and safe investment. We made a terrible mistake.”

“My son values his education and was very intent on attending a prestigious California university. Unfortunately, he has not been able to attend that college because of the change in financial circumstances caused by Peter Frommer’s actions. What value do you put on the quashing of a teen’s dreams?”

Wu directed Frommer to begin serving his sentence May 31.