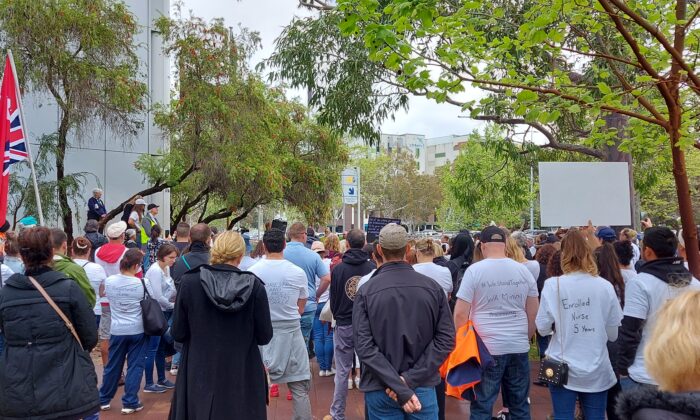 West Australians March Against No Jab, No Job Mandate For Health Staff

Hundreds of West Australians gathered outside the WA Department of Health on Friday to protest the state’s decision to mandate COVID-19 vaccinations for healthcare workers.

The directions issued last month covers staff providing services for heath, medical, nursing, pathology, pharmaceutical, and social work, along with administrative, security, and other ancillary services. Non-compliance will result in a fine of up to $20,000.

According to marked white shirts adorned by some members of the crowd, individuals present spanned from healthcare to construction and mining.

A nurse told The Epoch Times that she believed the decision to force staff into receiving the jab went against the principles of healthcare.

“It’s coercive,” she said. “One of the foundations of healthcare is that care should be consented to. You can’t forcibly treat someone with a therapeutic—that’s just not what healthcare is.”

The nurse said that she was concerned with insufficient evidence around the long-term safety of vaccines given that all of the available vaccines had not completed clinical trials.

“It’s something that we’re all willing to lose jobs over. All these professionals are willing to give up years of work. Look at the numbers on everyone’s shirts, 15 years, 17 years, 20 years,” she said,” she said. “I’m devastated to lose my job, but I’m not going to be coerced into taking an experimental drug.”

Western Australia is currently experiencing a healthcare staff shortage, which will be exacerbated if staff leave over a refusal to adhere to the mandate.

Protesters were joined by non-healthcare staff, with one construction worker concerned the mandate could eventually cover other industries.

“I’m not anti-vaccine, I’m anti-untested medicine,” he told The Epoch Times. “I’m mainly here because I’m concerned about losing my job and what’s going on with the nurses. If we don’t stand up for each other, there’ll be no one to stand behind you when they come for you.”

The demonstrations were also joined by a group of around 20 members of a “pro-vax” and “anti-fascist” movement. A spokeswoman for the group said she was for mandatory vaccinations given the severity of the epidemic wrought by the virus.

“We should be doing everything we possibly can to save people’s lives,” she said. “If that means lockdowns, making our workplaces safer, I think that includes vaccinations.”

She also said she did not think that the demonstrators should be allowed to protest against the vaccine mandate because it promoted “selfish, anti-human ideas.”

A tradesman not participating in the protest said he thought the protests should be allowed, and also that the mandate may be needed to ensure Australians’ safety against the pandemic.

“You’ve got to have freedom of speech,” he said, adding, “If we want to get out of this then enforcing the vaccinations might just have to be the way to go. Sure, it may not be completely the most moral way of doing things but in the end, it’s probably the way it has to be done.”

Another passerby said he supports people’s own decisions.

“I think it should be your own choice,” he told The Epoch Times. “I think the human race, we should all just work together to protect each other—instead of being under a wing saying you ‘have to do this,’ ‘you have to do that.'”