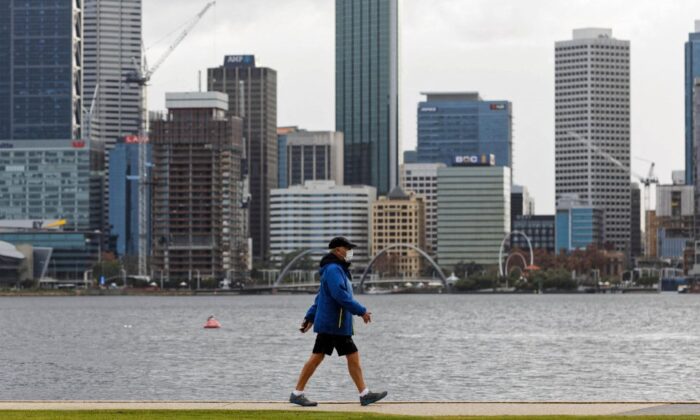 A man wearing a mask walks along the foreshore in Perth, Australia on Jun. 29, 2021. (Photo by TREVOR COLLENS/AFP via Getty Images)
Australia

WA had planned to reopen its interstate borders for Feb. 5, abruptly backflipping on its decision in fear that two doses of vaccination did not effectively protect against the Omicron variant of the CCP (Chinese Communist Party) virus.

Industry groups had slammed the move over the “severe and long-lasting ramifications for the state and the nation.”

Industries that were most damaged included tourism and international education, with overseas students—most of which came from China—contributing to a significant portion of the state’s GDP prior to the pandemic.

In all, the tourism industry contributed $10.5 billion to the state’s economy, while a report commissioned by StudyPerth (pdf) estimated that in 2019, the 53,404 international student enrolments in WA boosted the state’s GDP by $2.1 billion.

To help alleviate the financial loss, $35 million will be offered for businesses in the tourism sector, with $18 million to support education providers.

A total of $13 million will be available for event organisers, including to help make up for lost ticket sales.

WA Premier Mark McGowan said that reopening the borders would have come at a cost to those who have yet to receive their third booster dose of a vaccine.

“There is no denying that Omicron has changed the world with how easily transmissible and infectious it is,” McGowan said.

“That’s why it would have been reckless and irresponsible to fully reopen WA’s borders when many people had not yet had the opportunity to get their third dose.”

McGowan had previously indicated the state would be aiming for 80 to 90 percent of the eligible population to be tripled-jabbed before considering reopening borders. However, nearly half of 16-and-overs have already received their third dose.

“Like always, together Western Australians will get through this—by following the health advice and benefiting from high levels of vaccination,” he said.

According to a survey by the Chamber of Commerce and Industry WA, the effects of the hard border cost businesses on average $2.5 million.

Peak industry body Australia Industry Group (Ai Group) criticised the decision and made accusations that the state government had not engaged with business before pulling the pin.

“The decision was taken with no meaningful consultation with industry and with clearly little understanding of the strain that big parts of the state economy are already under given a lack of staff, virtually no labour mobility, deeply stressed supply chains and the significant reputational damage as a place to do business that WA is already suffering,” Ai Group Chief Executive Innes Willox said.

“WA is now an island within an island. The announcement flies in the face of agreements at the national cabinet to reopen, gives industry no certainty when the state will reopen and provides businesses with no guidance about any support they will receive,” he said.

“The state has had two years to prepare the health system to deal with the COVID outbreak and this raises questions as to why they apparently remain so ill-prepared to deal with the far milder Omicron variant,” Stratton said.

“Our hospital system is ready … we’ve been preparing our system to open for the 5th of February,” Robertson told reports on Jan. 20.