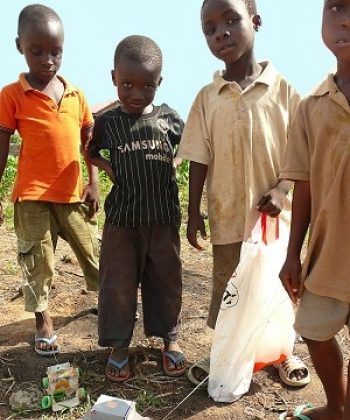 Believe it or not, these middle-class Ghanian boys, covered in dirt in the early afternoon, were sparkling clean in the morning. (Zoë Ackah /The Epoch Times)
Africa

TORONTO, Canada—It was a shock to return to the clean, orderly paradise that is Canada after a year in Ghana.

The paved roads and immaculate public transport vehicles are so advanced that they have evolved into a species capable of speech since I left town. Even the plane I flew in on had little interactive screens in front of each seat with dozens of movies and activities for each passenger.

The streets here are free of working children, the playgrounds even have injury-proof rubber asphalt. The cars don’t spew clouds of coloured smoke. Everyone and everything are so clean! I didn’t feel like bathing for three days after arriving back—it just seemed impossible to get dirty.

I went to pick up some information about how to apply for childcare, and though it is 14,000 times harder to get a subsidy space than it was a year ago (they allowed more people to apply but created no new spaces), I was impressed that I didn’t have to bribe anyone to get the paperwork processed.

The lights are always on and everything works well (except Bell Expressview). My husband even got a well-paying job in under a week. Incredible to one coming from a country where there is little in the way of work, and even when you do work, little chance of being consistently paid.

But all of these things are inconsequential. The very first thing I did—really—was flush the toilet and watch about four litres of clean drinkable water go down the drain.

Water. We have it. Anytime we want we can just … drink. Free flowing potable water is not making it to most of Ghana’s homes. If you have no well, and no money to bore one, you must rely on the public system, which is flawed to the point of uselessness. Or you must pay by the bucket.

Water is what keeps children from dying of dehydration. Water is what you must add to soap before it has the capacity to clean away germs that kill children. Water is needed in every step of safe food preparation. And when the sun beats down on you, you must drink.

Though clearly an easier task in Canada, our government here is doing what I feel is the number 1 job of a government – supplying potable water to every household. We take it for granted. The supply of clean water is limited, believe it or not.

Taking a Bath? It’ll Cost You

In Kumasi, a bucket of water costs five cents, and it is not always drinkable. When water costs money people use less, and many of my neighbours in Ghana were using two buckets of water a day. How did they do it?

When taking a bath, people in my house took two buckets to the bathroom in the morning, one to flush the toilet, and one to bathe. You needed a cup to scoop out the water needed for brushing your teeth. When bathing, I’d take a cup and wet myself completely, then take a soapy sponge and lather from head to toe. The last step is to rinse, using the cup to rinse off all the soap.

The entire morning routine used about 10 gallons of water, though in times of desperation I could bath three kids with a single bucket (okay, okay, but there were clean enough).

In Ghana, I washed my laundry by hand each morning, and further conserved by flushing the toilet with my used laundry water. Some would do their laundry with 15 gallons of water, which they would then use to do the dishes, and finally use the last bit to flush the toilet.

This whole process was rather labour-intensive, but it led me to ask whether a similar process is doable without buckets or backbreaking labour. A quick web search led me to Water Savers Technology’s AQUS system, which uses the wastewater from the bathroom sink to flush the toilet. The maintenance is about 15 minutes a year, and the estimated costs to run the pump is 50 cents a year, the manufacturer promises.

After a call to company president Tom Reynolds, I discovered that the suggested retail for this gadget is around $300. Though only 500 have sold so far, it seems Water Savers is in negotiation with a large manufacturer, and the AQUS kit could be at Home Depot or Canadian Tire in the next two years. He also mentioned that they are now working on the bathtub drain model. Good idea!

Can the Wealthy Ones Take the Lead?

In the West, it seems everyone is striving to do things cleaner and greener. In Ghana, the buzzword is “development.” The question is, though, what kind of development? It seems many Ghanaians are poised to step over the mistakes made in the West and move straight to clean options.

When faced with frequent blackouts and a serious energy crisis, Ghanaians realized that relying on the antiquated Akosombo damn for all their power wasn’t going to work. After some positive utterances about switching to solar power in a county that has too much of the stuff, the verdict came in: too expensive. They decided to resurrect the previously rejected Bui dam project. It’s silly really. Wasn’t there a massive natural disaster that flooded the north of Ghana in 2007 that was caused in part by a dam?

Is solar power really too expensive for the developing world? After a quick call to Solatron Technologies, a California-based leader in solar panels, helpful salesperson Katie explained to me that to take a small home off the grid, the equipment would cost around $5000. Though too costly for the average family, the cost is about eight times less than that of buying and shipping a Range Rover.

And if you have been reading this column, you will know there are thus plenty of people in Ghana who can afford to go solar. Shouldn’t the haves take the lead and let the have-nots scoop up the used parts later? Is a government incentive really necessary? I think it should come from the people. Why show off your glittering car when you can show off your glittering roof and save money too?

Trying something new doesn’t always come naturally. It is especially difficult in Ghana where the interests of big business are even more capable of getting in the way in a system rife with corruption. Public funds are inadequate to make any dramatic changes, unlike here where we have no excuse whatsoever.

Just like in North America, where previous incentives are vanishing, it seems incumbent upon homeowners to make the switch, and without the possibility of selling excess power back to the power company. If the Ghanaian government allowed people to do that, as the Germans have, even with no other incentive I’m sure they’d find some takers.

With widespread power failures and a water crisis, voters coming into the December 2008 elections are looking for some serious commitments around energy management—in fact, it is a key issue.

Let us hope that green technologies and the courage to publicly reject fossil fuels in a county that just discovered oil become the cornerstone of someone’s political campaign in the upcoming year. Is that too much to ask?