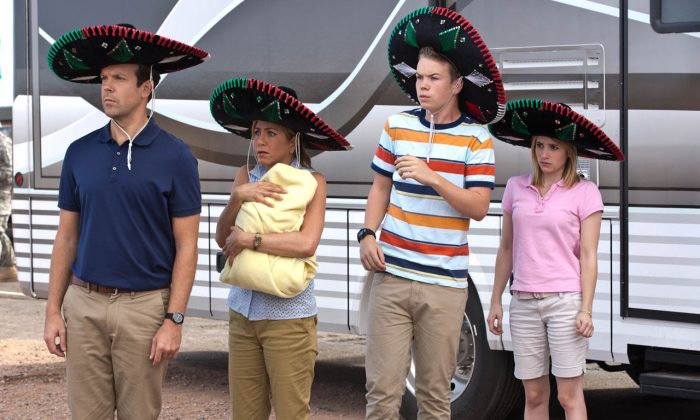 Jason Sudeikis, Jennifer Aniston, Will Poulter, and Emma Roberts play a fake family that was given the mission to smuggle weed across the Mexican border. (Warner Brothers via The Movie Blog)
Entertainment

‘We’re The Millers’ Nothing Special

With all the You Tube videos to warm audiences up to this opening, it seemed like “We’re The Millers” was set to be a constant barrel of laughs.

Don’t get me wrong, it was definitely funny in places, it just lacked the pizzazz that comes with a great comedy classic you’d watch over and over again. I doubt I’ll watch it again. I’m still trying to figure out why there has been such an abundance of costly in-your-face hype for this movie, expecting it to be hugely impressive—then I realized it wasn’t, it just needed to sell.

Small time pot dealer David Clark (Jason Sudeikis) screws up when he loses a whole backpack of weed after being robbed by a bunch of lame greasy teenage punks, or “the cast of Annie,” as he puts it.

His boss Brad (Ed Helms) is lax about this, seemingly more interested in his mammoth tank of sharks and his killer whale. However, to repay him, he forces David to smuggle a “smidge and a half” (2 tons) of weed across the Mexican border. He casually ‘rents’ his neighbors—a stripper and a geek, and a random, apparently homeless brat (Emma Roberts) to become his squeaky clean fake family.

After haircuts, wardrobe changes and showers, The Millers look like your average happy-clappy, straight-laced, mid-western, overly-keen, All-American fam. Now imagine that as their pimpin’ RV that puts Walt White & Jesse’s to shame rolls up to Rick Ross’ Hustlin.’

Director Rawson Marshall Thurber manages to weave in some memorable parts but unfortunately it just doesn’t fly the same way as his first feature film Dodgeball. Dodgeball was ridiculous, but hilarious.

“We’re The Millers” wasn’t ridiculous enough to make that category, and not well-written enough or continuously funny enough to be a classic. It rides on predictability from start to finish with too many long gaps of dull that sometimes makes you feel like you too were on a boring RV trip.

Jason Sudeikis, in my opinion, saved the film. He consistently cracked out hilarious one-liners, and the anticipation for them throughout the film was the most exciting thing about it. Just when a scene was starting to get a little dry he would bust out lines that served as much needed piri-piri to a bland boiled chicken.

Jennifer Aniston was also pretty entertaining, quick witted, and bounced well off Sudeikis. Supporting roles from Kathryn Hahn as Edie and Nick Offerman as Don were highly entertaining as the Fitzgerald family, who RV holiday for real.

If you watch the film as completely tongue-in-cheek and don’t expect much from it at all, then you will probably enjoy it more. It’s not good enough to be a great comedy, and it’s not bad enough to be a bad-good comedy. Don’t expect to be creasing over with laughter the whole time, but there is definitely some great laugh out loud moments from a great cast.