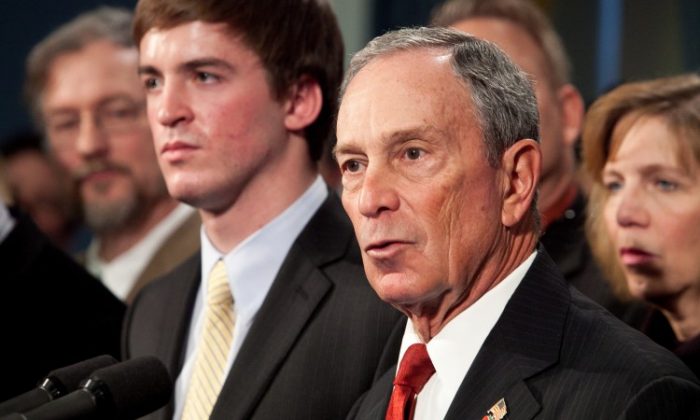 Pam Simon(L), a survivor of the Gabrielle Giffords shooting last year, with her friend Roxanna Green, who lost her daughter to gun violence. (Samira Bouaou/The Epoch Times)
US

‘We’re killing each other’: Bloomberg Offers Reasons for Gun Control

NEW YORK—Mayor Michael Bloomberg walked into New York’s City Hall Monday accompanied by 34 people who over the past two decades have lost a loved one to gun violence or have survived it themselves. The 34 people represent the average number of Americans who die each day due to gun violence.

“We’re killing each other—and we’re the only industrialized country where this happens,” Bloomberg said.

“I want to know what our nation’s leaders plan to do,” Bloomberg said. “Congress and the White House has to come up with something that stops this carnage no matter what the political ramifications are.”

The 26 deaths in Newtown, Conn., last week spurred Mayors Against Illegal Guns into action. Bloomberg and Boston Mayor Thomas Menino are co-chairs of the coalition that consists of more than 725 mayors advocating for gun control.

About one million people in America have been killed by gun violence since the assassinations of Martin Luther King Jr. and Robert Kennedy in 1968, according to Bloomberg. In 2009, firearms killed 11,493 people, the most recent year statistics are available, according to the national Centers for Disease Control and Prevention. That equals 68 percent of total homicides.

Following the Sandy Hook shooting, as after previous mass shootings, public leaders and gun control lobbyists are pushing for regulation at the federal level.

Mayors Against Illegal Guns wants Congress and President Obama to make combating gun violence the number one priority at the start of the next legislative session in January.

“This legislative package would make it harder for criminals, drug abusers, minors, and the mentally ill to get guns, and harder for them to inflict the level of carnage that we saw this week,” said Bloomberg.

The organization also recommends three actions by the executive branch, including having the Justice Department prosecute people who fail their background check after lying on their forms—more than 71,000 in 2009, according to the coalition, citing the FBI.

Bridgeport, Conn., Mayor Bill Finch said on a video, “It isn’t too early start talking about gun control because those children deserve our prayers and our comfort for their families, but they deserve us to fight harder than we ever had.”

The 34 persons gathered with Bloomberg have each created a video detailing the impact of gun violence on themselves after either surviving a shooting or losing a loved one because of such violence.

Chris Foye, who lost his son Chris after he was killed in Harlem by a stray bullet in 2009, stood near Bloomberg holding a T-shirt with a picture of his son on the front. Near them stood Lori Haas, whose daughter was shot and injured during the 2007 shootings at Virginia Tech, and Nardyne Jeffries, whose daughter Brishell was killed after attending a funeral of a gun violence victim.

Pam Simon, 65, a community outreach organizer for Rep. Gabrielle Giffords, was shot last year when a gunman opened fire into a crowd at an event.

“We need to reach out to our members of Congress and say we’ve had it—enough of partisan politics,” said Simon after the press conference.

“One of the things people often forget is the long-term effect it has on people; your physical and your emotional energy.” said Simon. “So this is not being shot and recovering, or losing somebody and recovering. There really is no recovering.”

They both traveled to Washington, D.C., recently and met with staff from several legislators’ offices.

“We were met with a very mixed reaction,” said Simon. “In many cases they’re very supportive, but feel that they’re politically locked.”

There are many gun shows in Tucson and people can purchase them there without undergoing a background check, said Simon, one of the loopholes the mayor’s coalition wants changed.

Bloomberg, who is known for spending $600 million of his own money toward anti-smoking initiatives, reiterated on Monday that he couldn’t name an exact figure of what he would spend to counter the National Rifle Association, a pro-gun rights organization.

“I have no idea [how much I am going to spend], but I’m going to do what I think is appropriate and impact the dialogue,” he said. Bloomberg endorsed President Barack Obama in part because of his perception of where Obama stood on gun control.

Asked whether mental health and education should be addressed instead of just focusing on gun control, Bloomberg said yes.

“But those are just ways to avoid the basic issue—it is guns on the streets in the hands of people who federal law says shouldn’t have them that is killing our people,” he said. “Long-term solutions are nice, they are necessary, and we shouldn’t walk away from them, but we have to protect each other today.”

“No single law—no set of laws—can eliminate evil from the world, or prevent every senseless act of violence in our society,” he said, according to a transcript. “But that can’t be an excuse for inaction.”

“In the coming weeks, I will use whatever power this office holds to engage my fellow citizens—from law enforcement to mental health professionals to parents and educators—in an effort aimed at preventing more tragedies like this,” the president said. “Because what choice do we have? We can’t accept events like this as routine.”