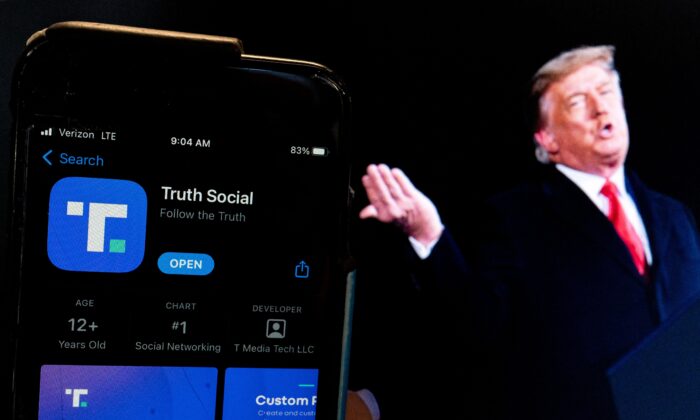 An image of former President Donald Trump next to a phone screen that is displaying the Truth Social app in Washington, on Feb. 21, 2022. (Stefani Reynolds/AFP via Getty Images)
Social Media

Truth Social, a platform created by Trump Media & Technology Group, is tuning up and getting ready to go to the next level, the platform’s CEO Devin Nunes told The Epoch Times.

About the official launch in mid-April, he said that “there’s a lot of fake news out there,” and that in reality they are doing well, and growing by the day.

“President Trump and I had both said very clearly in numerous interviews that we were not going to be fully operational … and let everybody on until after the first quarter,” Nunes said.

After moving out of beta testing in April, they opened up access to the platform via web browser in mid-May, effectively allowing users from any device.

The next step is an Android app.

“At this point, we’re just essentially waiting for approval,” the former congressman said. “And then we’ll be in the Google Play Store.”

Truth Social management is not just imitating any other single platform, they’re “looking at the best of all other platforms.” Users are not only offered information and news—it’s also meant to be fun and engaging.

“We’re trying to keep it simple and intuitive, easy for people to use, but have the best of all the platforms. So if you look at it, our videos on our pictures are very, very good, which is getting us more of that Instagram/Tiktok range,” Nunes said.

“We have to have a fun platform, where people go there for reasons other than just kind of news and information. And they go there to social network with each other.”

Nunes is aware that social media habits are migrating to video.

“They want video and pictures. So over time, I think you can safely say that we are getting closer to Instagram and Tiktok with our feature set now. And then we will be adding, over the rest of the year, we’re hoping to get to where we have some of the best Facebook features such as lists and groups.”

Truth Social managers are not currently allowed to talk about metrics because they are in the middle of a merger with Digital World Acquisition Corp., a special purpose acquisition company.

Former President Trump has the largest following on the platform: three and a half million people.

The platform is heavily focused on America at the moment but is in the process of opening up to other countries gradually, starting with English-speaking ones.

New feature updates from early July include a profile carousel atop the feed to connect the user to the most popular accounts they follow.

Video length was increased from two to ten minutes, and GIFs are now supported.

“And we have polls now which people are having a lot of fun with,” Nunes said. “It was a big update last week.”

Upon being asked how they would promote people from both sides of the spectrum, Nunes asserted that they won’t censor for political reasons.

“We’re giving people their voice back, opening the internet,” Nunes said. “We’ve had a lot of Democrats join the platform.”

This promise, constant mitigation of bots and spam accounts, as well as a two-factor authentication process when people sign up is what can give Truth Social get an edge over its competitors, Nunes said. Twitter is now suing Elon Musk after he walked back on a multibillion-dollar deal to buy the company.

Nunes however, thinks that Twitter is a “house of cards” and stated that Trump’s and his intention was never to compete with them—he doesn’t consider it a social media platform, but rather, a “Global PR Wire.”