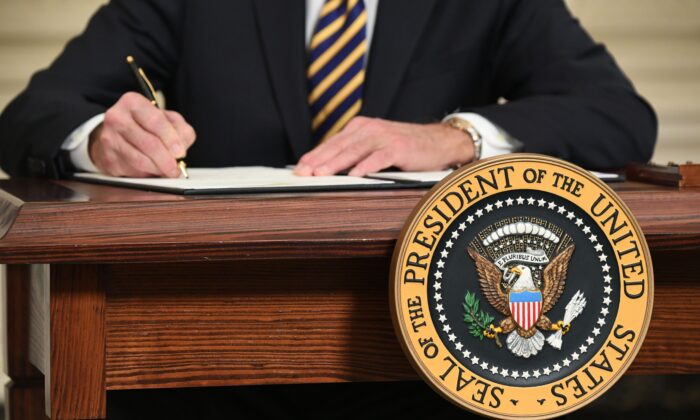 "Biden’s signature legislation proposal, the Build Back Better Act, was designed as the most expensive spending package ever, at $3.5 trillion. (Saul Loeb/AFP via Getty Images)
Business Columnists

We’re From the Government, We’re Here to Help

Another day, another government handout.

The United States has become an economy that is addicted to cheap money.

And yet another word has recently made its way into our vocabulary… the Public-Private Partnership (otherwise known as a P3).

In truth, P3s are not new. They’ve existed for years. Decades really.

P3s refer to the financial agreements between the government and a private-sector company looking to launch a project that might be too costly should the private enterprise attempt to do it on its own.

The first thing you need to understand is that they’re not all bad. For instance… P3s have helped fund toll roads, rebuild bridges, and build water systems across the country. Good things have come from public-private partnerships.

Where a government can spend public funds for the betterment of the lives of the public it serves, these partnerships are fine.

Like anything where the government is involved, the spending can easily be abused. Let us count the ways.

The federal government hasn’t spent “public” funds for decades. For more than half a century they’ve only spent borrowed money—loans they’ve taken out in the form of Treasury bond issuance. And lately, as their appetite for spending has grown, they’ve gotten worse by selling most of that debt to the Federal Reserve, but you know that story.

So today P3 spending is often viewed as a bottomless pit of cash that can be spent anywhere—national debt be damned.

Another thing you should know … when it comes to funding private companies, I am totally opposed to a specific form of public-private partnerships—subsidies. If your business can’t operate without a government crutch, you shouldn’t be in business.

But now a P3 is once again in an industry where it doesn’t belong.

You Scratch My Back

On Jan. 27, President Joe Biden met with the CEOs of General Motors (Mary Barra) and Ford (Jim Farley). Depending on the headline you read, either Biden was looking for the CEOs’ support for his stalled Build Back Better legislation… or the CEOs were looking for another handout to subsidize their EV divisions.

Turns out, it was a little of both.

Barra and Farley both came out in full support of Build Back Better. They started by touting their visionary investments in the future of electric transportation.

“Both companies pledged during the United Nations Climate Change Conference to work toward all new car sales being zero-emissions vehicles globally by 2040, and GM pledged to pursue all-zero emission vehicle sales by 2035.”

But as the meeting went on, it became clear what the whole show was about. “The bill, included in Build Back Better, would lift the 200,000 vehicles per manufacturer cap and implement $7,500 point-of-sale consumer rebates for electric vehicles. It would pay out an additional $4,500 for vehicles assembled in a union facility and $500 for vehicles using a battery manufactured in the U.S. For the next five years after that, the $7,500 base credit would only apply to electric vehicles made in the U.S.”

The emphasized section above means Elon Musk (who’s no stranger to government money himself) is out, because… you know, unions.

Unfortunately, Jim Farley said the unspoken part out loud: “But generally speaking, at a competitiveness level of the country, just having enough incentives to help the customer make the economic decision to transition to electric is probably the bigger, more important priority.”

“I’m very concerned about the country’s competitiveness if the country doesn’t do what other countries have done, which is put their foot on the scale of economics with incentives between $7,000 and $10,000 per vehicle,” Farley said. “That’s what it’s going to take.”

Farley certainly has a reason for being a BBB evangelist—his company lost over a billion dollars last year.

Not Good for Business

The EV market has a lot of hurdles to clear before they become the dominant form of transportation.

Number one on the list: being affordable and profitable without requiring a $12,000 kickback from the government.

Right now investing in EVs is still an early stage proposition. Tesla’s 292 P/E ratio is a testament to that.

The government is trying to pick winners by extending subsidies for union-made cars only. Their track record is pretty dismal.