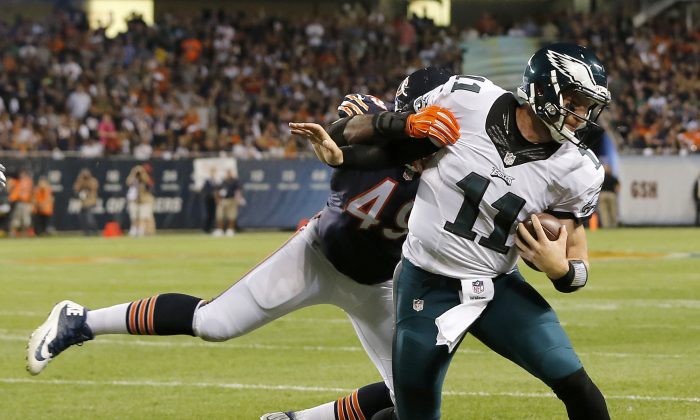 CHICAGO—Carson Wentz followed up an impressive NFL debut with another solid performance, throwing for 190 yards and a touchdown, and the Philadelphia Eagles beat the Chicago Bears 29–14 on Monday night.

Wentz showed plenty of poise, just as he did in his debut against Cleveland.

Playing in the city where he was drafted by the Eagles with the No. 2 overall pick, he completed 21 of 34 passes and played turnover-free ball in his second straight game despite absorbing several big hits.

“Throughout the week, I just realized I’m going back to kind of where my life changed so to speak,” Wentz said. “It was cool to be back here, especially to come out here with the win.”

Ryan Mathews ran for two scores, and the Eagles (2–0) scored a pair of touchdowns late in the third quarter to break open a two-point game.

While Philadelphia was pulling away, Chicago quarterback Jay Cutler walked to the locker room with a right thumb injury and did not return.

That was the biggest blow for the Bears (0–2), who lost several players and fell again after opening with a loss at Houston. It’s not the sort of start they envisioned in their second year under coach John Fox after finishing last in the NFC North. But they continued to struggle at home, where they were 1–7 a year ago.

Cutler, who completed 12 of 17 passes for 157 yards, walked to the locker room following an interception by Nigel Bradham late in the third quarter. Cutler was seen having his right hand examined on the sideline early in the third following a strip-sack by Destiny Vaeao, though he said it happened sometime earlier in the game. That play just aggravated it.

Along with the injury, Cutler got an earful from injured Bears linebacker Pernell McPhee. Cameras caught the two having a heated exchange following the interception.

The Eagles were leading 9–7 late in the third when Mathews bounced off the line and spun outside before lunging in for a 3-yard touchdown.

With Cutler throwing off his back foot on the next play from scrimmage Bradham intercepted a pass apparently intended for Alshon Jeffery, who was about 10 yards behind him, at the 30 and returned it to the 2.

Wentz then hit Trey Burton with a touchdown pass to make it 22–7 with four seconds left.

Eagles coach Doug Pederson on Wentz: “He took care of the football and made some nice, tough throws. It wasn’t perfect. But at the same time, he’s seeing things really well. And he’s commanding the huddle and dialog on the sideline with the players and coaches is something that a nine or 10-year vet would do.”

Fox on being 0-2: “It’s two games and we have 14 games left. Right now all our focus very quickly will go to Dallas to go on the road Sunday night.”

Cutler set up the game’s first touchdown when he spun to his left and unloaded a 49-yard heave to Jeffery that put the ball on the 5 in the opening minute of the second quarter. Langford ran it in from the 1, giving Chicago a 7-3 lead.

Eagles safety Malcolm Jenkins and several teammates raised their right fists during the national anthem in a protest prior to their game. Jenkins said Saturday he would lead teammates in a demonstration against social injustice. Cornerback Ron Brooks and defensive end Steven Means joined him. It was not clear if another Eagles player joined in. Jenkins had insisted the protest would not be “an anti-police thing” and that police “are a key part of the solution in this issue.”

Bears: Linebacker Lamarr Houston left the game with a left knee injury that Fox said “seems to be substantial.” Houston was hurt trying to rush the passer in the second quarter and walked gingerly toward the sideline after being tended to by team medical personnel. … Nose tackle Eddie Goldman was taken from the field on a cart with an ankle injury early in the fourth quarter after he was at the bottom of the pile on a running play. … Safety Adrian Amos and cornerback Bryce Callahan exited with concussions in the third quarter. … Safety Chris Prosinski injured his right calf, and running back Ka’Deem Carey strained his hamstring.