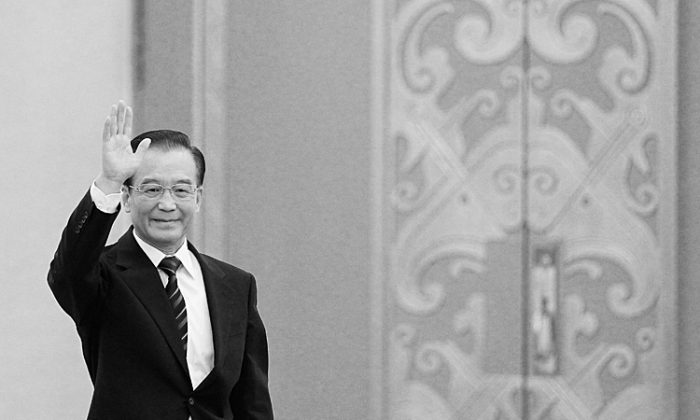 Wen Jiabao, China's premier, waves as he arrives for a news conference following the close of China's National People's Congress (NPC) at The Great Hall Of The People on March 14 in Beijing, China. Wen has been pushing for ending the persecution of Falun Gong, according to a source in Beijing. (Lintao Zhang/Getty Images)
China

The Chinese regime’s Premier Wen Jiabao has been pushing for ending the persecution of Falun Gong with reparations going to members of the spiritual practice, according to a source in Beijing.

His proposal has been opposed by Zhou Yongkang and the faction led by former regime paramount leader Jiang Zemin. Jiang initiated the persecution in 1999, and Zhou, as Public Security Minister (2003-2007) and head of the powerful Political and Legislative Affairs Committee (2007-present), has been heavily involved in implementing Jiang’s campaign. Hu Jintao is said not to have commented on Wen’s proposal.

When Wang Lijun, the former police chief for Chongqing and the right-hand man for Chongqing Party chief Bo Xilai, attempted to defect at the U.S. Consulate on Feb. 6, he brought international attention to the regime’s forced live organ harvesting from Falun Gong practitioners.

Wang is believed to be heavily implicated in this atrocity. In a speech Wang gave in 2006, he bragged about having overseen “thousands” of organ harvesting operations as the police chief of Jinzhou in Liaoning Province, although Wang did not specifically mention harvesting organs from Falun Gong practitioners.

Bo Xilai was governor of Liaoning Province from 2000-2004. Forced organ harvesting from Falun Gong practitioners was first discovered in 2006 in Liaoning, and the province has been termed the “epicenter” of organ harvesting in China.

Wen denounced the organ harvesting and Bo Xilai’s involvement in it during an internal meeting at Zhongnanhai regarding the Wang Lijun incident.

“Without anaesthetic, the live harvesting of human organs and selling them for money—is this something that a human could do?” Wen said at the meeting of Party leaders, according to the source. “Things like this have happened for many years. We are about to retire, but it is still not resolved.”

“Now that the Wang Lijun incident is known by the entire world, use this to punish Bo Xilai. Resolving the Falun Gong issue should be a natural choice,” the source quoted Wen as saying.

The report that Wen has asked top Party leaders to redress the case of Falun Gong finds a kind of corroboration in the recent behavior of China’s Internet.

Normally, terms relating to the practice or the persecution of Falun Gong are among the most tightly censored on China’s Internet, but, in the third week of March, searches that formerly had been blocked were fruitful.

Someone within the Chinese regime allowed searches that treated Falun Gong as legitimate or exposed misdeeds that were part of the persecution—what might be expected by an effort within the CCP to support the attempt to redress Falun Gong.

More information was opened up around 8 pm on March 23 (Beijing time), when Baidu search results for “Bloody Harvest.” “Bloody Harvest” is the book by David Kilgour and David Matas detailing their investigation into the forced, live organ harvesting from Falun Gong practitioners. Baidu showed information regarding the organ harvesting from Falun Gong practitioners, including an article about a press conference for the book.

Also on the evening of March 23 (Beijing time), an article entitled, “Witnessing the process of live organ harvesting” appeared on Baidu when searching with the key words “Wang Lijun live harvest.”. This article discusses the persecution of Falun Gong practitioners and the live organ harvesting.

Also on March 23, searching on Baidu with the key words “False Fire” brought up a video program produced by NTD Television that debunks the Chinese regime’s propaganda regarding the purported self-immolations by five Falun Gong practitioners on Tiananmen Square in 2001. The NTD video shows that the incident, which was very heavily reported on by state-run media, was a hoax.

Shi Zangshan, a Chinese affairs expert in Washington D.C., told The Epoch Times that both Hu Jintao and Wen Jiabao lack sufficient political and moral power to fight Jiang’s faction if they only use corruption and internal struggle as the tools.

Shi held that Hu and Wen should continue to expose the crimes of Jiang Zemin and Zhou Yongkang. Hu and Wen will gain the moral high ground in the Party’s infighting, and, as public opinion turns against the Jiang faction, Hu and Wen can attack.