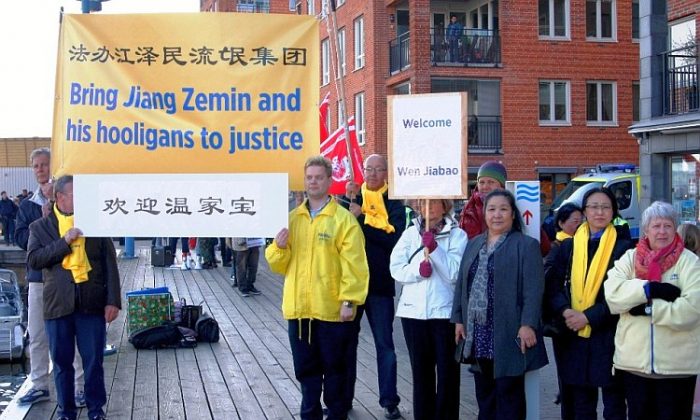 Wen Jiabao Arrives in Sweden, to Welcoming Committee and Protests

GOTHENBURG, Sweden—When Chinese regime officials visit other countries, they are often greeted by loud protests. On Premier Wen Jiabao’s trip to Sweden on Monday, there were protests, but there was also a welcoming committee drawn from a surprising source.

Among the Falun Gong practitioners was Janette Wästilä, who recently moved to Gothenburg.

“We want to welcome the Chinese Prime Minister, Wen Jiabao, because we heard he is distancing himself from the persecution of our fellow practitioners in China,” she said.

The Falun Gong practitioners urged Wen Jiabao to stop the brutal persecution of Falun Gong in China, which has been ongoing since 1999, and make sure that the former Chinese Communist Party head Jiang Zemin, who is responsible for the persecution, be brought to justice, along with his accomplices.

Wen Jiabao and his entourage went aboard the Swedish ship Götheborg—a reconstruction of an 18th century ship—in the harbor of Gothenburg, Sweden, to the sound of celebratory cannon fire.

The event turned into a noisy affair. While a choir was welcoming Wen, demonstrators were shouting through bullhorns. Meanwhile, Falun Gong practitioners were quietly meditating.

On Tuesday, Wen and his entourage will pay a visit the now Chinese-owned Swedish car manufacturer Volvo, and then travel to Stockholm to meet the Swedish Prime Minister, Fredrik Reinfeldt.

After being shown around the Swedish Ship Götheborg, the Chinese delegation dined with the County Governor, Lars Bäckström, at his residence.