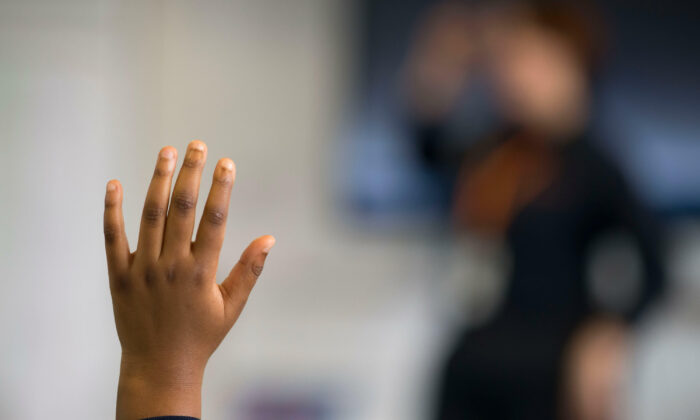 A group of parents in Wales has launched emergency legal action in a bid to stop a new sex education curriculum from being taught from September.

Lucia Thomas, treasurer of Public Child Protection Wales—a group founded by one of the claimants and which is backing the case—told The Epoch Times on Tuesday that the claimants had filed an injunction on Friday, asking the Welsh government to delay the rollout of the compulsory Relationships and Sexuality Education (RSE), which they worry will sexualise children as young as 3 and push gender ideology on them.

Earlier this year, the group’s chair Kim Isherwood applied for a judicial review of the policy on behalf of 5,000 parents and grandparents, which was granted by the High Court, but the hearing is scheduled in November, two months after the RSE is due to be rolled out.

Thomas said similar curriculums have been taught around the world, as well as in Scotland, and “there’s overwhelming evidence as to the inappropriate explicit sexual content and also the indoctrination as in the gender ideologies.”

She pointed to a project in Scotland called Relationships, Sexual Health, and Parenthood (RSHP), which she believes is a preview to what will eventually be launched in Welsh schools.

Slides for 6- to 8-year-olds say families can be small or large, and can include a dad and a mum, adopted or foster parents, grandparents, two mums, two dads, or two mums and two dads, which appears to allude to heterosexual, homosexual, and polyamorous relationships.

The age group is also taught about human conception by fertilising an egg with sperm, while the process of sexual intercourse is briefly described to 9- to 12-year-olds, who are also taught about transgender people, according to the slides.

“It’s inappropriate for children. It’s confusing for children. And there’s just no place for it here,” Thomas said of such materials.

According to Thomas, RSE will be “embedded across the entire curriculum.”

Citing examples from Scotland, she said children learning maths can be asked to add up the number of rectangles in a LGBTQ flag or the number of transgender individuals.

She also said schools can use third-party handouts which are copyrighted, meaning parents may not see what their children are taught at school.

Thomas said Public Child Protection Wales is getting “overwhelming support” from parents. But she also said some parents do not believe what the group is saying because “it’s too sinister for them to believe,” while a smaller group of parents think “it’s absolutely fine that children know about pleasurable sex before they’ve left primary school.”

The Welsh government is making RSE a statutory requirement in the new curriculum, which it says will “gradually empower learners at developmentally appropriate stages” (pdf).

It insists that there is “a legal requirement that this be developmentally appropriate,” which means that “children will receive learning that is appropriate to their age and maturity.”

It added that it is committed to covering relationships in terms of rights, equity, sex, gender, sexuality, bodies, body image, sexual health, well-being, as well as violence, safety, and support.

Across the learning strands, curriculum content in RSE must “be inclusive and reflect diversity,” it said.

“It must include learning that develops learners’ awareness and understanding of different identities, views and values and a diversity of relationships, gender, and sexuality, including LGBTQ+ lives,” it added.

The Welsh government previously said that its RSE is in line with the principles (pdf) of the United Nations Convention on the Rights of the Child, and that all children and young people have the right to receive high quality, holistic, and inclusive education about relationships and sexuality.

Last December, the sex education legislation was criticised for almost entirely removing the word “sex” from its curriculum along with the terms “male,” “female,” “boys,” “girls,” “straight,” or “heterosexual.”

The Welsh government declined The Epoch Times’ request for comment.

Owen Evans contributed to this report.