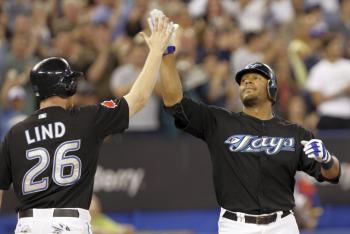 Hughes (15–6) pitched for 3.2 innings at Rogers Centre and was relieved by Javier Vazquez who finished off the game for the Yankees.

Hughes gave up six hits for five earned runs, including a two-run homer by Vernon Wells in the bottom of the third inning after giving up two in the first inning.

Wells was the hero on offense for the Jays with two runs scored, three hits, and four RBIs. He was a double short of hitting for the cycle.

He came close to getting the double in the bottom of the sixth with a deep fly ball to left field, but Brett Gardner was there to make the catch. The last Blue Jay to hit a cycle was Jeff Frye in 2001 against the Texas Rangers.

The big center fielder opened the hitting for the Jays on Wednesday with a line drive triple in the bottom of the first inning to send Fred Lewis in for the first run.

Wells then scored after a pitch by Hughes bounced off Posada’s glove. Communication between Hughes and Posada seemed off for the night, with Posada scrambling to recover several wild pitches.

Then in the bottom of the fourth with the bases loaded, Wells hit a ground ball single to send Aaron Hill home for his fourth RBI after his two-run homer in the third.

The Yankees put some pressure of their own against Jays starting pitcher Brett Cecil (11–6) in the top of the first, loading the bases with two outs.

But Cecil got himself out of the jam, catching a grounder by Eduardo Nunez to make the play at first and end the Yankees early threat.

The Yanks got on the board with a two-run homer by Marcus Thames in the fourth inning with no outs after Robinson Cano hit a double.

New York was unable to do any more damage in the fourth though with three straight outs proceeding.

Second base man Aaron Hill got another run for the Jays with a solo homer to left field in the bottom of the fifth inning to put the Jays up 6–2.

Then it was three scoreless innings until the Yankees put up a fight in the top of the ninth.

He gave up a single to Nunez that brought in Kearns to bring the score to 6–3 with runners on first and second and rising tensions in the stadium.

Then Jeter was hit by a pitch to load the bases.

Gregg escaped what could have been an incredible comeback by the Yankees, though, with Curtis Granderson flying out to center field to end the game.

The Yankees continue their road trip with a three-game series against the Chicago White Sox that starts Friday.